I was ill the first time I heard Alt-J, painting the walls in a burning-hot apartment to try to make the time pass. Steve Lamacq played their demo on BBC Radio 6 while I worked, then he invited them into the studio for an interview. This was in July 2011. By October of the following year they’d signed to Infectious Records, released their debut album and won the Mercury Prize for album of the year.

It all happened very quickly for them.

During that first interview, they sounded incredibly young — naïve and excited. They talked of how they made their recordings at home, keeping the volume as low as possible to stop the neighbours from complaining. I liked their name, and I liked their music; a hybrid style mixing elements of indie-rock and folktronica. I also liked the fact that they seemed to be oblivious to the clichéd dictates of “rock & roll.” They talked of their studies, they laughed too much.

When I ran out of walls to paint, I put the apartment up for sale and used it as a studio to work in between doing viewings. I was living 40 miles away and drove there every day to try to make the time pass, still not feeling well. On the long journeys and in breaks between working on music there, I continued to listen to Radio 6 and I continued to hear Alt-J; first “Tessellate,” then “Matilda” and “Breezeblocks.” I was always pleased when their songs came on. They stood out from a lot of the more standard indie fare, the arrangements and textures were always interesting and, at the very least, when Radio 6 were playing Alt-J it meant they couldn’t be playing Elbow for the next few minutes, which could only be a good thing.

But there was always an elephant in the room with Alt-J, something no one ever seemed to mention, and that was the voice. I’d heard the singer speaking in the first interview and he spoke like a normal kid from Leeds — so what on earth was that accent he was singing in? What did he even think it was? I’ve always been a fan of affected vocals: I grew up listening to David Sylvian, Chris Thompson, Kate Bush, Bryan Ferry, Marc Bolan, 1966 Bob Dylan. I like artifice and pretence. But this Alt-J guy, I couldn’t quite come to terms with what he was doing. Sometimes his pronunciation seemed to border on the offensive; at other times it appeared as if he’d learned to sing by simply watching Billy Connolly’s famous stand-up bit, “Singing at Parties,” over and over again on YouTube.

It wasn’t quite a deal breaker for me, though. More a distraction from the music sometimes. I’d drift off mid-song trying to nail an impersonation, or trying to fathom who he thought he was influenced by — or trying to work out why the guy who sometimes sang backing vocals wasn’t the lead singer in the band.

So, two years after that Mercury Prize win, This Is All Yours is Alt-J’s follow-up album — and the first two singles from it have been clogging up Radio 6 again, squeezing Elbow out once more. Thankfully.

I found Alt-J’s debut too long. There were short musical interludes sandwiched between every pair of songs, and there were already too many songs. There are too many songs on this new record too (14), but at least the interludes have been dropped this time round. I came to This Is All Yours fully prepared for the possibility that the production might sound very cluttered. The arrangements on the first album were so dense and tightly packed that going any further in that direction might have turned everything into a mush. But that is where This Is All Yours is a delightful surprise, even a revelation. The production is sometimes more acoustic than on the first album, and sometimes more complex and richly textured, but the one thing that is constant on all the songs is a brand-new feeling of space. Even on the most densely layered tracks, like “Hunger of the Pine” or “The Gospel of John Hurt,” there is an ever-present sense of open air, of room to move.

And so, ultimately, this record fills me with a sense of hope. Hope for a new generation of kids no longer in thrall to the “rock & roll” clichés of attitude and self-destruction. Hope for the possibility of continuous growth and development, rather than just repeating what won the prize last time round. Hope for experimentation and a cross-fertilization of styles. And hope, too, that sometime soon someone close to the singer will sit him down quietly and ask what gives, and tell him that it’s not on. And tell him to wise up.

At its best, this record continues a line that runs from Kid Loco’s A Grand Love Story (1997) and David Holmes’ Lets Get Killed (1997) through Aim and the Avalanches and Hassle Hound.

And it’s heartening to know that someone is still running down that line. 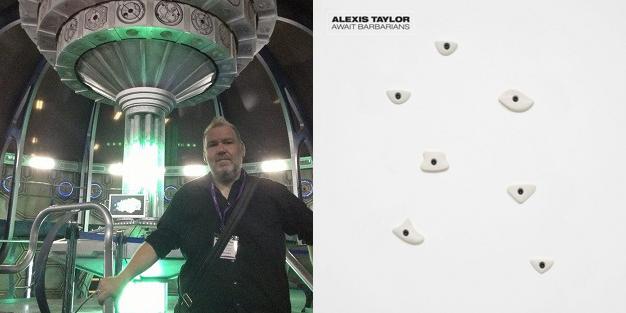