In my opinion, screenwriter Callie Khouri would deserve a place in the pantheon even if she’d never made another great movie after her 1991 debut, Thelma & Louise – it’s one of those films, like Stagecoach or The Godfather or Rear Window, that works in virtually every conceivable way a movie can work, hitting the sweet spot between art and entertainment with perfect aim. A superior genre film that delivers all the conventional satisfactions an action movie should, it’s also a poignant portrait of female friendship, a deliriously liberating sex comedy (those scenes between Geena Davis and Brad Pitt!) and a moving look at lives unlived (has there ever been a scene more achingly beautiful in its truthfulness than the final night between Susan Sarandon and Michael Madsen in this film?).

Thelma & Louise also, at the time of its release, became a lightning rod for controversy as its celebration of strong women dovetailed with the ascendance of right-wing radio and the demonization of so-called “Feminazis” by Rush Limbaugh and his brethren. I have no idea if Khouri and her collaborators – director Ridley Scott, stars Susan Sarandon and Geena Davis, etc. – were out to make a consciously political film, but they managed to do so simply by giving women agency and putting them at the center of the kind of violent empowerment fantasy men had been gorging on since cinema began. Thelma & Louise became a cultural touchstone like Easy Rider or Death Wish or Looking for Mr. Goodbar before it, a film to be wrestled with and argued about, a State of the Union address as much as a movie. The difference is that Thelma & Louise had its finger so firmly on the pulse of something basic about American culture that it didn’t lose its power once its cultural moment had passed the way those other films did – if you watch it today, it feels more modern and relevant than ever (especially given our pussy-grabbing President), yet it doesn’t have a trace of the message movie about it. It’s too much fun, and it’s too fertile in its contradictions and complexities, all of which Khouri and Scott keep in perfect balance without squeezing any of the spontaneity out of their lively film.

I’ve liked everything Khouri has worked on since Thelma and Louise, particularly her 2002 directing debut, Divine Secrets of the Ya-Ya Sisterhood, but I still was unprepared for the scope and richness of Nashville, the television series about the country music industry she created in 2012. Just as Thelma & Louise secured Khouri’s place in film history (and don’t just take my word for it – the Library of Congress added the movie to their National Film Registry last year), Nashville reveals her to have an astonishing gift for knowing exactly how to utilize the episodic television format to her own artistic ends. Like Thelma & Louise, Nashville encompasses an impressively wide array of experiences and genres, and the serial format allows Khouri to go both wider and deeper than she’s ever been able to do in the feature-film world. The series, which follows an ensemble of women and men at different levels of success as they navigate the country music business in Nashville, is both a detailed anthropological study of a distinct subculture (you really get the sense that Khouri knows this world inside and out) and a penetrating drama in which the intertwining personal stories become increasingly compelling as the show progresses. The integration of music and character is unparalleled in my memory, either on television or in film; there’s absolutely nothing arbitrary about the many songs on the series, each of which move the story forward and reveal new layers about the characters writing, singing and hearing them.

Which leads me to one of the most distinctive aspects of Nashville, which is its exploration not only of the creative process but of creative personalities – it’s like a country music companion piece to Scorsese’s New York, New York or Damien Chazelle’s La La Land in its depiction of the struggles afflicting artistic temperaments in love. Yet the ensemble format allows Khouri to dig deeper than Scorsese or Chazelle, as the myriad intersecting relationships allow for a larger spectrum of circumstances and responses to those circumstances – Khouri’s couples have to deal with an endless variety of struggles, temptations and insecurities, all of which are examined with her usual combination of sharp wit and innate empathy. There have been a lot of TV shows and movies about musicians, but even the great ones have never fully captured the unique combination of heroic and neurotic qualities that most great artists possess. Khouri is fully aware of the extremes of greatness and sacrifice and selfishness and self-indulgence (and self-pity) that can exist within the same person, and writes and directs her material to express this with honesty, clarity and a constant sense of revelation.

She’s supported in this regard by a uniformly superb cast anchored by Connie Britton as country music superstar Rayna Jaymes and Hayden Panettiere as newcomer Juliette Barnes. As the series begins, Rayna’s fame is starting to slip and Juliette’s is on the rise, and the seasons to follow trace the wildly erratic trajectories of both careers as they continually intersect and separate. Although her series does contain elements of classic showbiz tales like A Star is Born and the aforementioned New York, New York, Khouri eschews the “rise and fall” mythology of most movies about performers in favor of something far more realistic and dramatically rewarding: a study of the total unpredictability of a life in the arts, and of what that does to the human psyche.

Britton and Panettiere approach this subject from different and equally fascinating angles. As the ingénue, Panettiere is a raw nerve who’s all emotional intensity – she hasn’t learned how to manage the highs and lows yet, and responds to every minor adjustment as though the tectonic plates are shifting beneath her feet. Britton has already gone through the steep learning curve Panettiere is suffering through, but it doesn’t make the new challenges and changes in her career any easier – she just handles them with more grace and level-headedness. The greatness of Britton’s performance, however, lies in her ability to communicate the fragility beneath the strength – she can express more with a subtle glance or gesture than lesser actors could with an entire monologue. In each episode we get an increased sense of what she’s survived personally and professionally, and Britton is always finding new emotional notes to play without betraying what’s already been established about the character. Panettiere finds similar depths in a character who initially doesn’t seem to have any – when the series begins we assume Juliette is little more than a talented but spoiled brat. Yet like Britton, Panettiere is able to play multiple levels at once, slowly letting the vulnerability and intelligence show through the cracks of her narcissism.

I don’t have the space to comment on every other excellent performance in the series, so I’ll just say that the standard set by Britton and Panettiere is met by everyone in the supporting cast – I’m a particular fan of Charles Esten’s work as Deacon, the love of Rayna’s very complicated life. An ex who remains in Rayna’s sphere as a collaborator – and ultimately a lover once again – Deacon is played by Esten in a manner that makes him both a classic country-music archetype and a shatteringly relatable man who, like Rayna, is a deeply sensitive survivor. Their relationship over the course of the series has the expansiveness and passion one would find in a great novel, but it’s a passion both tempered and amplified by real life – Khouri is brilliant when it comes to showing how love and work bounce off of each other in different, unexpected directions. In her meticulously detailed world, the changing landscape of the music business influences personal relationships and vice versa, often in unpredictable but painful (and sometimes triumphant) ways.

The investigation into all the finer points of finding and keeping love has not only remained fertile in the show’s fifth year, it seems to be getting more profound and affecting. This is partly thanks to the fact that Khouri has joined forces with new showrunners Ed Zwick and Marshall Herskovitz (Thirtysomething, My So-Called Life), who were previously behind the greatest series about marriage and divorce in the history of American television, Once and Again. Thus far, Zwick and Herskovitz have synthesized their own distinctive sensibilities with Khouri’s to exquisite effect – any worries that the show might have lost its way in its recent transitions (from previous showrunner Dee Johnson to Zwick and Herskovitz, from ABC to CMT, etc.) were immediately assuaged by the Season 5 premiere directed by Khouri and written by Zwick and Herskovitz. That episode, “The Wayfaring Stranger,” sums up everything that has made and continues to make Nashville great television, with a newly reflective tone that makes it even more rewarding – like its characters, the series no longer needs to prove itself, and the fact that its insights are so unforced makes them all the more powerful. 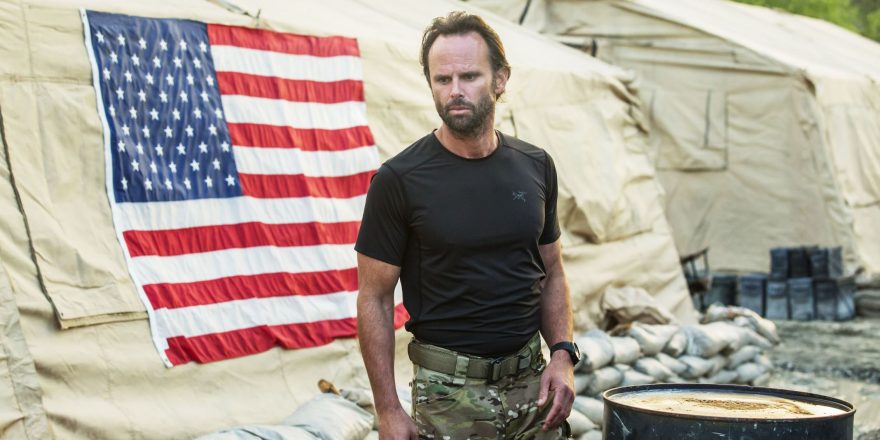 Second Screen: Why Six is Giving Award Season Movies a Run for Their Money