Revisiting movies you loved as a kid can be a risky proposition; special effects and cultural attitudes that once seemed fresh can come across as horribly dated, visual techniques and plot twists that initially felt innovative are less impressive when one has a more comprehensive knowledge of film history, and emotional moments that had the power to bring a 10-year-old to tears often reveal themselves to be nothing more than cheap sentiment when viewed through adult eyes. Yet an old favorite that has held up can recharge a filmmaker’s creative batteries in a way that few new films can – there’s something about getting back in touch with that pure, naive response one used to have to movies that can really refocus and reinvigorate one’s love of cinema.

My recent return to John Landis’ debut feature Schlock, on the occasion of its Blu-ray release (from German company Turbine Media), is a case in point. I thought Schlock was hilarious when I first saw it on home video in the early ’80s but never got around to seeing it again as an adult, even though Landis’ work in general has skyrocketed in my personal pantheon; movies of his that I thought were great the first time around have only gotten better with age, and some that underwhelmed me are now among my all-time favorites. Maybe that’s why I avoided returning to Schlock; some part of me suspected that it wouldn’t live up to my memory of it, that it would be the one Landis film best left in the past, protected by the hazy glow of nostalgia.

When I first came across Schlock as a movie-crazed nine-year-old, I was already a Landis disciple – he was, in fact, the first director I actively followed and wanted to emulate. The first piece of Landis footage that I ever saw wasn’t a movie but a trailer: the teaser for The Blues Brothers, which I vividly remember seeing before a showing of Steven Spielberg’s 1941 on Christmas Eve, 1979. I don’t remember ever being more excited for a movie before or since – the six months between seeing those few minutes of footage and the actual release of The Blues Brothers were the longest of my young life. Growing up in the suburbs of Chicago, where The Blues Brothers was shot, I came across a lot of press about Landis and the making of the film in the months leading up to its release, and I devoured every word of it. I felt a kinship with the exuberant cinephile director, a bond that was cemented 25 minutes into The Blues Brothers when John Belushi and Dan Aykroyd drove their car into a shopping mall. (If I had to trace my decision to become a filmmaker to one moment, it would be the scene in which the Toys “R” Us customer asks, “Yes, do you have a Miss Piggy?” and the Bluesmobile comes crashing through the wall.) I saw The Blues Brothers as many times in the theater as there were adults in my family who I could pester into taking me, and when it came out on video I rented the tape and watched it six times in one 24-hour period. Eventually I was able to wear my parents down into letting me watch the more risqué Animal House and Kentucky Fried Movie, and by the time Landis followed The Blues Brothers up with An American Werewolf in London, I was primed for that movie’s outrageously effective juxtaposition of truly terrifying horror, juvenile comedy and poignant, tragic romance.

Which brings me back around to my first encounter with Schlock. Sometime not long after I had the wits scared out of me by American Werewolf, I wandered into the video store and saw a VHS copy of Schlock, a movie I had read about but that had remained tantalizingly unavailable. Finding 80 minutes of something directed by John Landis that I hadn’t already seen at this point in my life was a discovery tantamount to that of the Dead Sea Scrolls, and I devoured Schlock – a parody of monster movies following an ape on a killing spree – with the same enthusiasm that the director’s other films had inspired. Yet as years passed, I began to distrust my own memory of the movie and suspected that it was amateurish and probably less funny than I remembered. I think this is due to a couple of factors, one being the typically horrible VHS transfer – the movie looked awfully murky, and with time the smeary black haze through which I recalled it only grew uglier in my mind. Then there was the opinion of Landis himself, who generally denigrated the film and seemed a little embarrassed by it; in his mind, Schlock’s only real worth came in the fact that it gave Rick Baker, who designed the gorilla suit, his first big job before he became one of the greatest makeup artists in film history.

Watching Schlock on Blu-ray revealed that not only was I right about its pleasures on first viewing, but if anything the lousy transfer had obscured how good it really was. Restored to its proper clarity, the most striking thing about Schlock is how purposeful it is – this is not the work of a guy figuring out how to make a movie, but of a born filmmaker who already has a near-flawless sense of mise-en-scène and cutting – the camera moves are surprisingly elegant, and the deep-focus compositions are case studies in subtle interplay between disparate elements in the frame for maximum comic effect. The film’s confidence is all the more amazing given the circumstances of its production: Landis, just 21 at the time, played the ape himself, and thus directed the entire film inside a gorilla costume that Baker took several hours to apply each morning; Landis would get up at around 2 a.m., get made up like a gorilla, than spend the day shooting a movie in the 120-degree heat of Agoura, California – on 35 mm with a budget of around $60,000. Even under these insane conditions, Landis gives the sense of total control over his material, synthesizing wildly different sources and influences (the Marx Brothers, 2001: A Space Odyssey, Woody Allen, Trog and dozens of others) into something cohesive and unique – and absolutely hilarious.

Thus Schlock looks forward to many of Landis’ great later films, particularly his 1985 masterpiece Into the Night, a nocturnal comedy that unifies more contrasting tones in one movie than should be humanly possible. A vision of the nighttime lives of upper-class Angelenos that’s alternately affectionate, scathingly satirical and horribly frightening, Into the Night is also, like Schlock and so many of Landis’ other films, a sly commentary on movies themselves – on how we watch them, how we make them and how their imagery is inextricably woven into the fabric of our lives. It’s also the ultimate extension of the juxtaposition between horror and comedy Landis establishes in Schlock, perfects in American Werewolf, and playfully messes with in Innocent Blood; in Into the Night, the violence is at its most profoundly unsettling and realistic, all the more so because some of the physical comedy is so silly and sophomoric (and so expertly timed by Landis, as much a student of the great silent comedians as he is of grindhouse horror flicks and European auteurs). I can’t think of any other film with this tone, in which light comedy and romance coexist so easily with savagery and a calm, somnambulistic dreamlike atmosphere.

Like Schlock, Into the Night is a Landis movie I loved when I was younger that I reencountered on Blu-ray recently, and watching the two movies together one is struck by how clearly they’re both products of the same sensibility while also having virtually nothing in common in terms of style or mode of production. For all of Landis’ success, I don’t think he’s ever fully gotten his due in this country as one of our truly great directors – a filmmaker with as much range and as distinctive a voice as any other we’ve ever had. He’s directed comedies, horror films, musicals, action movies, a Western, documentaries and anthology films, and he’s managed to consistently smuggle his anti-establishment views on race, class and sex through the system by disguising them as escapist genre fare. From the razor-sharp social commentary of Animal House, in which Nixon and his plumbers become an authoritarian college dean and his lackeys, to Dan Aykroyd and Chevy Chase pretending they’re in a Hope-Crosby road movie when they’re really in a silly but trenchant satire of Cold War foreign policy in Spies Like Us, to the durable and increasingly relevant economic satire of Trading Places, Landis has steadily built a body of work as thoughtful, subversive and formally rigorous as any Hollywood director of his generation.

This isn’t what drew me to him as a nine-year-old movie buff, though – I just thought his stuff was funny. The amazing thing about Landis’ filmography is that it still works on me in all the ways it did back then, but reveals new layers and pleasures with every return visit. Based on Landis’ remarks in the Blu-ray extras for Schlock, he still doesn’t think it’s much of a movie, but he’ll have to take my word for it – it’s a fine first feature by a guy who would go on to be one of the greatest of his era or any other. 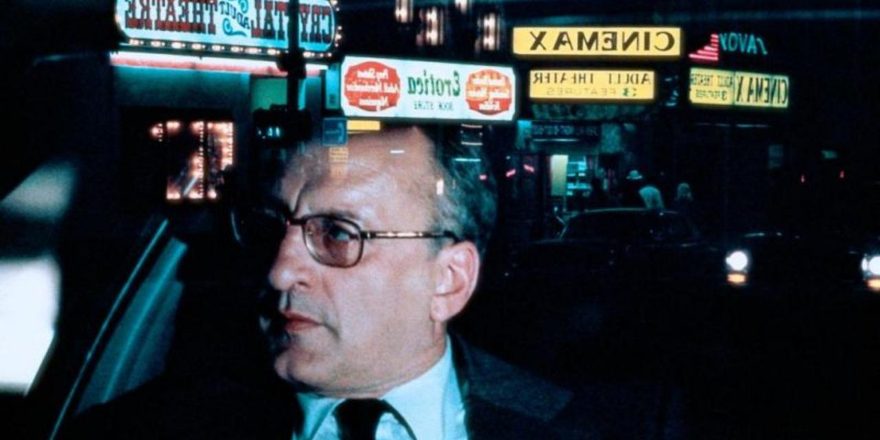