Nate Utesch is a music industry art director and a musician who performs as Metavari. Metavari’s latest record Soft Continuum (Studies Vol. 2) is out June 10, 2022 on Joyful Noise.

At its core, “Kings Die Like Other Men (Rediscovery)” is a complete reimagining of a song with nearly the same name (“Kings Die Like Other Men”) that Metavari wrote back in 2009. This band has had so many versions of itself. We always joke that we should have changed the name of the project 10 times over at this point. Since about 2015, it has largely been a solo endeavor — it kind of evolved into this moniker for my own music, as a cast of people rotated in and out as they were available for touring or production aspects.

My friend Ty Brinneman, who I started the band with back in 2006, was the bassist. We would joke that he’d grown into more of a business partner than a performer in the band, just because of his own life and things pulling him away. But he’s always been there in the middle of the conversation of it all.

Throughout the years, we’ve been like, “What if we revisited fan favorites, or songs that get requested a lot — or that we’ve gotten the most residuals from — and rework them?” But we’d never taken the time to do it. Ty was diagnosed with mesothelioma in 2018, and as tides were changing for him, we talked about, “What if we just work on a record together?” If anything, just for ourselves, and to send to friends and family. It didn’t have to be a big old thing, just an exercise we’d do together. And if worse came to worse, then, selfishly, I’d have this kind of relic of him. Unfortunately, that is what those recordings have now become.

But we had immediately decided that revisiting our first record would be a cool thing to do together. So, that’s what we did. We made some notes about what we wanted to see happen, and how intense we wanted to get with the rewrite. Would we hold some of these ideas pretty loosely in our hands? Would other things be transposing chord progressions and riffs, and rewriting them as different instruments? But this song in particular was one that we were really looking forward to, just because it has a lot of memories. From 2006 to 2012, we toured all the time — we played SXSW each year, we played Canada — and every band knows the song that fans like the most, and this was that song in that era of the band.

Ty was sitting next to me when we were working through it, and it’s such an odd thing to describe in words, because it was very personal. It was almost an ambient process, listening to the old song. On paper, I think if you were to listen to them back-to-back, especially the first couple minutes, it might be hard to get from A-to-B. But what we had hoped was that the mood would be a little darker, but it was the same idea of kind: this slow burn through the song to this moment of release at the end, with these churning, cyclical progressions that just keep building very slowly, to where if you’re lost in it, you are not expecting it when you’ve finally gotten to the climax of the song because of how painstaking that progression is.

The band back then often utilized found samples throughout the music as sort of this musique concrète collage against the instrumental track. The first half of the original track is littered with obscure samples we collected from educational videos. I wish I could remember them all. I recall some of the clips are from an old Detroit tourism video. For the rewrite, I transcribed some of my favorite sound bites from the original and ran it through text-to-speech software. Some other sampled moments that were mimicked are footsteps at the beginning of the song and an exhale at a break in the middle. We reworked those into something that would be recognizable for people, and it has been.

I play piano almost entirely by ear, which is usually a pretty pure and visceral experience (if not also extremely novice) while in the early stages of writing. While rewriting the chord progression, I did something I’ve almost never done before: I hit record without a game plan whatsoever. I sat there thinking about the original track — as opposed to listening and attempting to transpose it — and played whatever in the world I was feeling as I walked through merely the “emotional memory” of the song. I hadn’t played the original chords in probably eight years and they were long since forgotten. So this was about recalling memories and attempting to put it to tape. It was quite bizarre, but I would be lying if I said it didn’t also feel magical.

For the ending, I knew I wanted to do something much more syncopated and potentially utilize a time signature that would push me in the process. I started sifting through some favorite composers and scores for inspiration and came across the most perfect section of music. Too perfect, in fact, and I decided to just gently “borrow” it. It’s a track called “The Dark Prison” by Drew Neumann from his score for MTV’s Aeon Flux cartoon in 1991.

I am old enough, good or bad, that Aeon Flux was very much a part of my adolescence. There used to be this block of programming on MTV called Liquid Television, which I think they advertised as their experimental animation shows. There were a whole bunch of different cartoons that were on, and one of them was Aeon Flux. It was this kind of avant garde, sci-fi, dystopian end-of-the-world show. The main character was this assassin, and in the first season she dies at the end of every single episode, and then at the beginning of the next one, they don’t explain why in the world she’s alive again. It was just wild and crazy, and there was a sexy element to it, and this weird, surreal, bizarre element to it, almost psychedelic. It was amazing and it left a mark on me.

I always loved the soundtrack — it had these percussive elements using these brittle ‘90s synthesizers, that, out of the context of an action show, are quite dated and corny. But in the context of Aeon Flux, it just feels so bizarre and perfect. I’m not sure why — perhaps copyright issues — but the score was released in 1997 with no mention of Aeon Flux, and titled Eye Spy (Ears Only: Confidential). I cannot find the Neumann track streaming anywhere online, beyond this 30-second snippet. I go to that soundtrack a lot for sound design and cues that I might not think of otherwise. So that’s what was happening here. “The Dark Prison” just had this really great syncopated bassline, this little call-and-response lead. I was just like, You know what? I think I’m just gonna lift this almost straight up. I’ll use this chord progression and put it in the key of the song, and then rework it and see what happens. It fit so well, as shameless as it was to do it that way.

Something that was fun with this song in particular was that, while we were working on it, we decided to utilize some software called MIDI Bass. With it, Ty could manipulate the hardware synthesizers in the studio with his bass guitar — basically using his bass as a controller. It was a new thing for us and the project, bringing Ty in to think about a song in the way that he would with his bass and the mind of a rhythm section, but then performing these other sounds. We would loop a song, and he would play it; I would manipulate a patch or a sound as he was playing it, and he would stop me when we got to something that was working. It was this beautiful and kind of sad thing — like here we are back together writing in a way that we hadn’t in a long time, but stumbling upon a way to work together that was way more connected. It was like we were working on the same thing at the same time, his hands and my more textural design approach to the sounds he was using as he played in real time.

And that was the last time we ever did it. When I hear that song on this record, it’s like, Oh, man, he worked through these songs and he wrote the pieces that he wrote in such a bizarre way that we had never done, and now those days in the studio are just locked into those recordings. They won’t happen again, but there they are. It makes it really special. He was always the kind of personality in the band that, whatever was happening in the studio that’s gelling and coming together, Ty was always the one thinking of something three miles away from that moment. Which, if in the wrong mood or with not the right amount of protein in your body, was extremely frustrating. But at the right time, it was exactly what you needed to jar you out of the typical ways that we would do things. I miss that now on the other side of it all more than in the heat of it. Those moments changed everything in the studio. Having that again in this one last way that we were writing made it more special for sure.

Soft Continuum will be out June 10 on Joyful Noise. Their new single“Páirc Sequence” is out now.

Nate Utesch is a music industry art director and a musician who performs as Metavari. Metavari’s latest record Soft Continuum (Studies Vol. 2) is out June 10, 2022 on Joyful Noise. 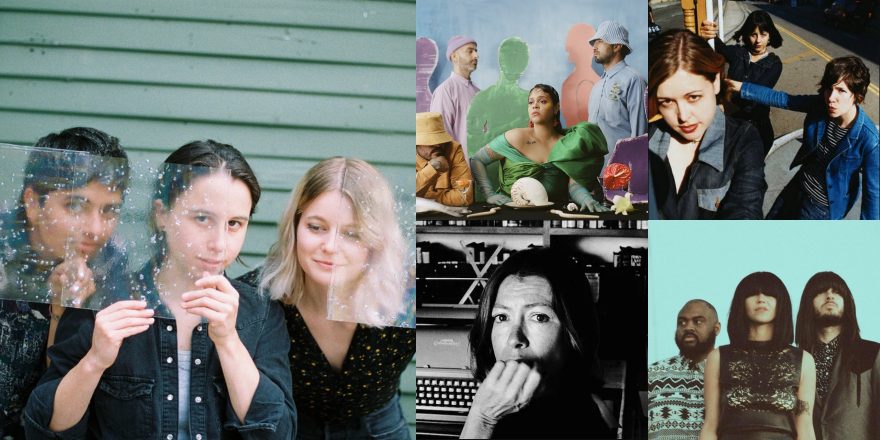