If you are like me — a white kid of a certain age who grew up on the not-great side of the tracks in a fair amount of family dysfunction — odds are that, if you became a fan of Art, there’s a certain kind of Art that became an instant taste treat. That is to say: The Texas Chain Saw Massacre and A Clockwork Orange, Salo and J.G. Ballard, Public Image Ltd.’s The Metal Box and Talking Heads’ Fear of Music and Don DeLillo … and hey, when you made your way back to the Art of Long Ago, odds are you read Titus Andronicus more than once. Blood, thunder, sadism, suicide, despair — life is horror! And what, are you going to try to tell me it isn’t? Let me quote from that great sage, Dr. Ben Carson, who had for my money the best quote of 2016: when asked if he was going to a memorial service for victims of a mass shooting that had just happened, he said, with perfect innocence, “No, I don’t think so, but I’ll probably go to the next one.”

To this very day, people ask me, “Do you like everything to be so dark? Wouldn’t you like to do something light — something, you know, people would like?” I do. Like any sane person who loves art, there is a moment when you fall in love with the free-form bliss of Matisse’s paper cut-outs; or the gin-martini high of Noel Coward’s Hay Fever; or the figure-eight ecstasy of a Fred Astaire set piece. If I am going to be rock-bottom truthful, I would have to say that if you gave me a suitcase full of money, put me in an empty office and said, “OK — begin,” I suspect what I made you with that bag full of loot would have … well, probably more blood, thunder, sadism, suicide and despair in it than it would have Fred and Ginger twirling and whirling and tip-tapping to Paradise. But maybe not. Because the Other Side — that place where elegance, glamour, verbal wit, surfaces of pleasure lie — calls to me in 2016, big time. I tire of “cinephiles” whose lives are spent dwelling in the sewer with Lucio Fulci and Andy Milligan. Those people, in my humble opinion, don’t love those movies; they love the smell of garbage. I’d rather go down a K-hole, endlessly rewatching this.

I guess because they didn’t grow up around the scent of garbage, it’s sexy and exotic to them. I don’t really understand those people — any more than I understand the million people in Los Angeles who say that Star Wars and The Breakfast Club are their formative experiences. That’s a level of normalcy I can’t even contemplate. What’s radical now is the exquisite. When I watched Suicide Squad recently, I felt as if I had been force-fed a huge warm jug of Mountain Dew and three pounds of half-melted Skittles. The filigreed takes us into a different world. That’s why a “4K restoration of Howard’s End” is being received now with tenderness and thanks rather than punk-rock raspberries; and it’s why one of the last “independent filmmakers” who can get audiences into theaters en masse is Woody Allen.

People who don’t get the late style of Woody Allen are like those Pauline Kael acolytes who persist in reviewing Clint Eastwood movies as if he were still living in 1976: they’re ignoring the evidence of their own eyes. Not only has Woody changed, the culture has changed — it’s curdled. The moviehouse has become a home of “tentpoles and tadpoles” — and there’s not much high style in either. Can you think of a studio feature that houses something like Darius Khondji’s rapturous treatment of Emma Stone’s skin in Magic in the Moonlight, where she appears literally luminescent from within? Is there an earnest indie feature with the kind of knotty, beautifully wrought, continuously surprising and then shocking narrative of Woody’s Match Point? Woody’s stock has risen in the way that, for instance, John O’Hara’s stock has risen since Matthew Weiner appropriated some of his moves for Mad Men: work that once seemed petit-bourgeois and slight now feels like the bulwark of a nearly lost civilization.

His new picture, Café Society, like many of his recent works, is an assemblage of used parts. It’s about a New York kid, Bobby (Jesse Eisenberg), who’s sent to Hollywood to work for his uncle Phil Stern (Steve Carell), a giant powerhouse agent. Once there, he falls in love with Phil’s secretary Vonnie (Kristen Stewart), who, it turns out, is in love with the boss, Uncle Phil. Heartbroken, Bobby returns to New York and works for his gangster brother (a perfectly cast Corey Stoll) as the impresario of various nightclubs. Bobby’s brains and charm and his brother’s muscle and money make the clubs a hit, and Bobby in essence invents an American version of Parisian café society: less highbrow, more a mix of the rich, wannabe rich and fake-rich. (It is one of the strongest gags that we cannot tell them apart without Woody’s voiceover narration.) In the end, Bobby has to reckon with his past when Vonnie walks into one of his joints — with a wedding ring on her finger, belonging to a freshly divorced Uncle Phil.

Café Society really kicks into high gear in its final act, and I find the last shots of the movie quietly devastating. Woody seems to be positing the young lovers’ fated-not-to-be relationship as sexily bittersweet, but in the end it’s harrowing. That said, there is a lot of material in the picture that is not of the first freshness. But when I see people on social media rolling their eyes about “the same old Woody Allen movie again,” I think — did people used to complain about “the same old Anthony Trollope novel again”? “That same old tired Titian painting”? Woody has achieved a level of reflex mastery. Remember that he pounds these out one a year — when he’s not doing an entire Amazon series in his spare time. Some are great, some are merely charming — but is there anyone else working on this level? Imagine what life will be like when, God forbid, some day, we don’t have those white-on-black credits to look forward to once a year. People deludedly used to tougher stuff may soft-soap Woody’s late movies, but as his heroes feel about their fickle, evanescent beloveds: you’re going to miss them when they’re gone. 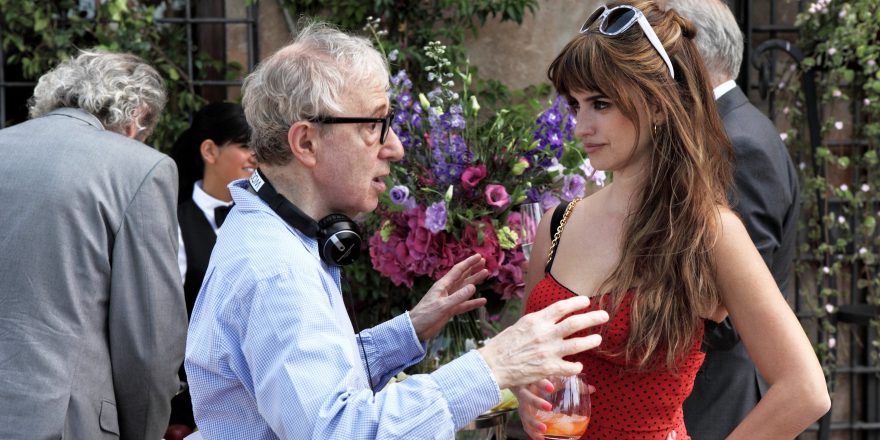 In Praise of Late Woody: The Woody Allen Fan Club is a Lonely Place to Be