Kyra Davis is the New York Times bestselling author of Just One Night, the critically acclaimed Sophie Katz mystery series, and the novel So Much for My Happy Ending. Now a full-time author and television writer, Kyra lives in the Los Angeles area with her son and their lovable leopard gecko, Alisa. Visit her online at KyraDavis.com or follow her @_KyraDavis.

True Blood is not that show.

In this world of vampires, werewolves, shape-shifters, witches, inbred cat-creatures and glow ball-throwing fairies, logic is rarely more than an afterthought. So if you’ve been scratching your head trying to figure out why the angry townspeople always try to attack the vampires at night rather than during the day when they might actually stand a fighting chance, you need to find a way to let it go. Likewise if you’ve been wondering why the show hasn’t bothered to explain how it is that Eric Northman (Alexander Skarsgård) was in the process of being incinerated at the end of the Season 6 finale but didn’t have so much as a singed eyebrow in the premiere of Season 7. And whatever you do, do not try to ascribe some kind of deep, metaphorical meaning to the series. True Blood isn’t the intellectual, bookish girl who looks like marriage material. Oh no. True Blood is the good-times girl you see dancing on the tabletops at your favorite bar, you know, the one you really want to fuck.

And you know what? There’s value in that. As an author of genre fiction, I’m frequently subjected to the griping of literary elites who think everyone should be reading Crime and Punishment and skipping books like the erotic suspense and humorous mystery novels I write. Don’t get me wrong, I love literary novels. Wharton, Fitzgerald, Orwell, Angelou, these writers are like gods to me. But you know what? When life is stressing you out and the blues start threatening your normally happy disposition, Dostoyevsky can feel a little heavy. Sometimes you need something lighter. Something exciting, fast paced and, most of all, pleasurable.

And that’s what True Blood is. Pure pleasure.

I didn’t start watching until the second season. Jason (Ryan Kwanten) had already headed off to the Fellowship Of The Sun, which may very well be the campiest, most ridiculous and most fabulous Christian retreat (or should I say training camp?) that has ever graced the small screen. The hypocrisy that permeated that place was so blatantly outrageous it was absolutely delicious. I mean, who can forget when the preacher’s wife, the fantastically wacked-out Sarah Newlin (Anna Camp), snuck into the bathroom while Jason was bathing and convinced him that God wanted him to have a handjob? But, of course, the Fellowship of the Sun was only part of the fun that season. There was Lafayette (Nelsan Ellis), who was whoring himself out with attitude and sass, and Eric, who with every smoldering stare managed to further drive home the point that hot bad boys really are utterly irresistible. And then there was Tara (Rutina Wesley) who was going around town giving everybody attitude for no apparent reason other than that she was so damn good at it.

Oh… and did I mention that a large percentage of the cast is ridiculously beautiful or that those beautiful people spend half their screen time walking around with little to no clothes on? And unlike some other shows, True Blood makes sure that its gratuitous nudity panders to both sexes. For every boob shot there’s at least one or two tantalizing naked-male-butt shots. I myself am not a butt gal but even I have to admit that these guys have some very nice junk in the trunk. I couldn’t tell you the name of the man Tara hooked up with in Season 3, but I do remember his butt.

As for the violence, it’s definitely gory and shocking, but this is not that Saving Private Ryan kind of violence where you find yourself faced with the real brutality and tragedy of war. No, this is Pulp Fiction Oh-My-God-Did-You-See-That?! kind of violence. The kind of violence that has vampires exploding into bloody, pulpy messes. Who among us didn’t gasp when Eric literally ripped a guy’s jaw out of his head? And if you think the sex in Fifty Shades was edgy, you must check out the scene where Bill (Stephen Moyer) twists his vampire lover’s head around 180 degrees during “rough sex.” By the way, having her head on backward only increased her arousal. In Bon Temps, the vamps like it freaky.

Speaking of Bill, I suppose I should mention the show’s central romance between Bill and Sookie (Anna Paquin). I truly enjoy their on-again-off-again, I-love-you-but-I-might-have-to-kill-you romance, but in and of itself it wasn’t enough to hook me. The reason I’ve become such an avid fan is that I just can’t help but revel in the collective guilty pleasure of it all. True Blood is the only show that I’ve ever developed a real ritual around. Every Sunday night I put aside whatever manuscript I happen to be working on, make myself a martini, pull out some dark chocolate and turn on HBO. I actually bought martini glasses just for this show. I thought I was the only one who made such an event over each airing until a friend admitted to me that her True Blood ritual is to light a whole bunch of candles, put on some lingerie and watch while cuddled up with her scantly clad boyfriend. For any other non-porn broadcast, that would be beyond bizarre. But True Blood’s different. It demands that its viewers embrace decadence. It positively preaches the virtues of indulgence. Taboos be damned, it’s simply going to give us what we crave. And it knows what that is, sometimes better than we do.

For instance, before True Blood I would have told you that stupid men are not attractive no matter what they look like. But then True Blood introduced me to Jason Stackhouse. There’s a man who can make witlessness look good. Not only is he built like a little Greek god but he’s also impossibly sweet and charming as hell. So yeah, I get why every female creature wants to spend the night with him.

But the cherry on top of this vampy sundae is the hot man-on-man action we’ve been treated to. The sexy but far too brief dream Sam (Sam Trammell) had about Bill in Season 3 was a start but then they gave us Eric’s murderous tryst with Talbot (Theo Alexander) a few episodes later. One naked man staking another from behind is rather obvious and rather silly symbolism, but it was sooo entertaining to watch. And of course they waited until the last season to give us the best of the best: Eric and Jason together. It happened in Jason’s dream and now that scene will live on in the dreams of women all over the world. I’ve written enough erotica to consider myself a bit of an expert on what makes a sex scene hot and I gotta say, they nailed it with that one (no pun intended). Two sculpted alphas stripping each other down is a fantasy that many women don’t want to admit to, even to themselves. And yet M/M romance (man-on-man books written by women for women) is one of the fastest growing segments of erotic literature. Trust me, guys, if you show your girlfriend this Eric/Jason scene she will pay attention… and then she’ll rewatch it after you’re gone…several times.

And that’s what has made True Blood such a great ride. It explores the fantasies and vices other shows steer clear of, not because it’s necessary for the storyline but because it’s fun. Did vampires Pam (Kristin Bauer van Straten) and Eric need to dress up like Republicans and infiltrate a Ted Cruz fundraiser in order to advance the plot? No, of course not. But I absolutely love that they did.

When the show ends, I’m truly going to miss my Martini Sundays. I’ll miss Eric’s casual threats and Pam’s sass. I’ll miss Jason’s wide-eyed innocence and raging libido. And oh my God am I going to miss Lafayette. None of these guys changed my life, but they sure as hell made it a lot more fun.

That said, I do think that bringing the show to a close was probably the right call. We’re at the point where there are about three main characters left who don’t have mystical powers and, at a certain point, even True Blood runs the risk of jumping the shark. I’m looking forward to the finale although I’m not exactly anxious about it. Yes, there will be some tense moments but I’d bet the farm that when all’s said and done, the right people, shifters and vampires will be riding off into the sunset together.

I’m sure of that because that’s what I want. It’s what we all want. And like the girl dancing on the bar, True Blood is very skilled at giving her admirers exactly what we want: pure, unadulterated and totally shameless pleasure.

Kyra Davis is the New York Times bestselling author of Just One Night, the critically acclaimed Sophie Katz mystery series, and the novel So Much for My Happy Ending. Now a full-time author and television writer, Kyra lives in the Los Angeles area with her son and their lovable leopard gecko, Alisa. Visit her online at KyraDavis.com or follow her @_KyraDavis. 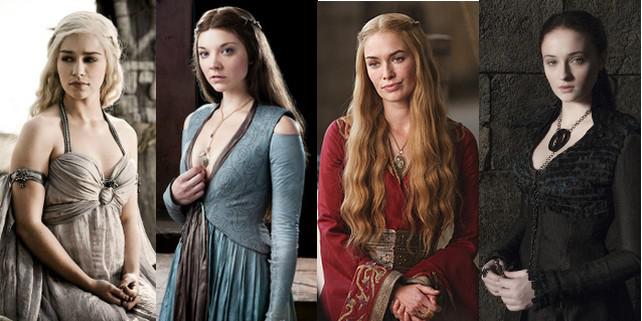 Novelist Kyra Davis Talks the Women of Game of Thrones