Pete Ohs writes, directs, shoots and edits. His latest film, Youngstown, is now streaming on Amazon Prime. He is a four-time Emmy-Award winner and was named one of Filmmaker Magazine‘s “25 New Faces of Independent Film” for 2013. His feature-length sci-fi film Everything Beautiful Is Far Away stars Julia Garner & Joseph Cross. premiered in competition at the 2017 Los Angeles Film Festival, where it received the U.S. Fiction Cinematography Award, was acquired by The Orchard and is currently available to stream online. He edited the features Beast Beast directed by Danny Madden, which premiered at the 2020 Sundance Film Festival, and Olympic Dreams, starring Nick Kroll and Alexi Pappas and directed by Jeremy Teicher, which premiered at the 2019 SXSW Film Festival and was named one of the 10 best films at the Festival by both Hollywood Reporter and Indiewire. He lives and works in Los Angeles. (Photo by Christian Sorensen Hansen.)

Have an idea. Write a script. Get a producer. Raise financing. Go out to cast. Scout locations. Storyboard. Rehearse. Crew up. Go shoot the movie.

Everything Beautiful is Far Away is a sci-fi fable starring Julia Garner, Joseph Cross and a robot head. It took years to “get made.” I’m proud of the movie. I learned a lot. But, if I’m honest, it wasn’t that fun. And that’s what people say about making a movie … it’s hard, a ton of work, years of your life, no one will care as much as you, and so on and so on. I’ve heard it. I’ve said some of it.

After I made my first feature, I had another idea, I wrote another script, I started talking to producers, and I recognized the cycle I was in, that many of us are in. And as I walked home from one of the coffee shops on Sunset Blvd after another hard day of sending emails and revising look books, I thought, “Why am I doing this?”

But I wasn’t thinking rhetorically. I was genuinely asking. “Am I doing this for fame? For money?” No. “To feed my ego?” Don’t think so. “To express myself?” Maybe, but that doesn’t seem quite right either … “Then … why?” Uncovering the answer required digging back into my youth and conjuring my initial feelings around making movies. They weren’t movies then, they were videos I made with my best friends in my driveway. We’d get together with a camera, spitball ideas until something made us laugh, then shoot it. We weren’t thinking about producers, or permits, or budgets, or festival premieres, or distribution strategies. We were thinking, “This is fun.” That’s why we did it then … Can that still be why I do it now?

So I formulated a theory, a hypothesis, that as an adult, a professional filmmaker, I could make a movie the way I did when I was 15.

No script. No producers. No budget. No permits. No crew. No problem.

For years, my friend Jesse Reed had been telling me to make a movie in his hometown of Youngstown, Ohio. Sure. That sounds fun. Plus, I grew up in Ohio, so that made sense – a return to my childhood.

I pitched the idea to two people I thought would be down for the experience, two people who were great at telling stories, who I loved watching and listening to – actors Andy Faulkner and Stephanie Hunt – and they both agreed. We would go to Youngstown with a camera for two weeks and see what happened. Together, we decided Stephanie’s character would be from Youngstown, Andy’s wouldn’t, and that “Witness Protection” would be a fun concept to play with. The rest we’d figure out later.

As the shoot approached, I started to worry. It was a familiar feeling – the pre-shoot jitters. And they aren’t fun. Sometimes, I keep a journal. Here’s my entry from two months out: 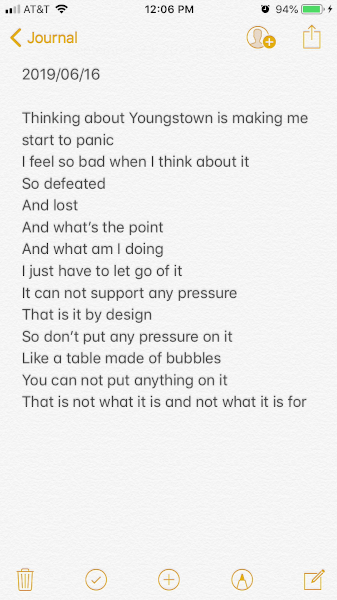 Thus was born the “table of bubbles” metaphor. I repeated this phrase many times to various collaborators along the way – the film is a table of bubbles. It’s neat, it’s fun to look at, but don’t put anything on it because it can’t support it. 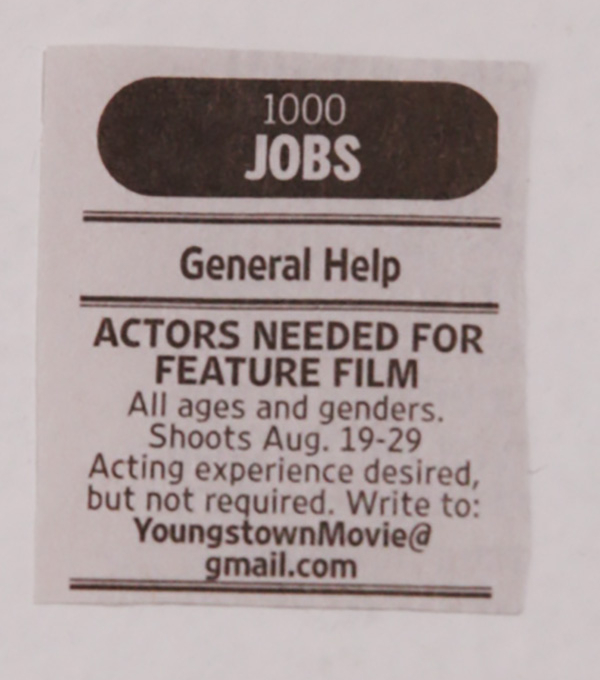 So, we went to Youngstown. Jesse met us there and introduced us to all the wonderful, colorful characters he knew from his own childhood. We put an ad in the local newspaper calling for actors and everyone who responded got a part. Each person we met, each place we visited, inspired a new scene and we wrote the movie as we went. Scenes were usually written the night before, but sometimes only moments prior to shooting. With it only being three of us, we were light on our feet. We moved fast and didn’t feel rushed.

When we arrived at a new location, I was able to quickly conceive of the ideal way to shoot the scene. I’m also an editor, so I always knew exactly what footage I needed, which created plenty of time to improvise. And there was never a concern to “make our day,” because there wasn’t a schedule and thus no target to hit. Sure, lots of takes were ruined from us making each other laugh. But that was good. That was the point. It was carefree and devoid of stress, which was the complete opposite of basically every set I’d ever been on. We were making a movie, but it never felt like it. It just felt like playtime.

Without a full script, we weren’t sure where the story would go, so we shot everything chronologically. Halfway through the shoot was the midpoint of the movie. And as we approached the end of the second week, we knew it was time to figure out the ending. And hey, if we couldn’t figure it out, that was fine too. We were just a couple kids trying to have a good time.

The thing is, time and time again, we did figure things out. We came up with ideas when we needed them. When one location fell through, another became available that worked even better. It’s like the movie gods were on our side. But I’m not religious, even about movies. What I actually think is, removing pressure helped the creative process. It enabled it.

And that’s the takeaway for me: pressure doesn’t help. Now, I don’t think everyone needs to go make a movie without a script or a crew or a budget because not every story can or should be told this way. But I do think that pressure is the enemy of creativity. A deadline might help with getting something finished and turned in, but “deadline” is an unnecessarily ominous word to discuss time management and setting priorities. Scripts are a great tool for communicating ideas and helping people get excited about the same things, but they’re also documents of the past and magic only happens in the present. A crew will disperse the collective load of responsibilities, but when someone isn’t meaningfully engaged, they can destroy the exact thing the team is attempting to build. And budget … well, budget is nice, but too often it’s irresponsibly spread too thin and the reality of supposed “compensation” is a lie. Budget defines the size of the sandbox, but need not limit the quality of the sandcastle. These things – script, crew, budget – should only serve to relieve pressure, to ensure that the table of bubbles remains intact.

When I watch Youngstown, I feel good. I smile. It brings up fond memories of good times, like watching a home video. I recognize things we would have done differently had we planned more, but I don’t believe those things are necessarily better. They’re different and they would make a different movie. I always say my favorite movies are the ones that exist. This particular movie wouldn’t exist if we had made it any other way and the way we made it was very fun. For that reason, I’m proud of Youngstown.

Pete Ohs writes, directs, shoots and edits. His latest film, Youngstown, is now streaming on Amazon Prime. He is a four-time Emmy-Award winner and was named one of Filmmaker Magazine‘s “25 New Faces of Independent Film” for 2013. His feature-length sci-fi film Everything Beautiful Is Far Away stars Julia Garner & Joseph Cross. premiered in competition at the 2017 Los Angeles Film Festival, where it received the U.S. Fiction Cinematography Award, was acquired by The Orchard and is currently available to stream online. He edited the features Beast Beast directed by Danny Madden, which premiered at the 2020 Sundance Film Festival, and Olympic Dreams, starring Nick Kroll and Alexi Pappas and directed by Jeremy Teicher, which premiered at the 2019 SXSW Film Festival and was named one of the 10 best films at the Festival by both Hollywood Reporter and Indiewire. He lives and works in Los Angeles. (Photo by Christian Sorensen Hansen.) 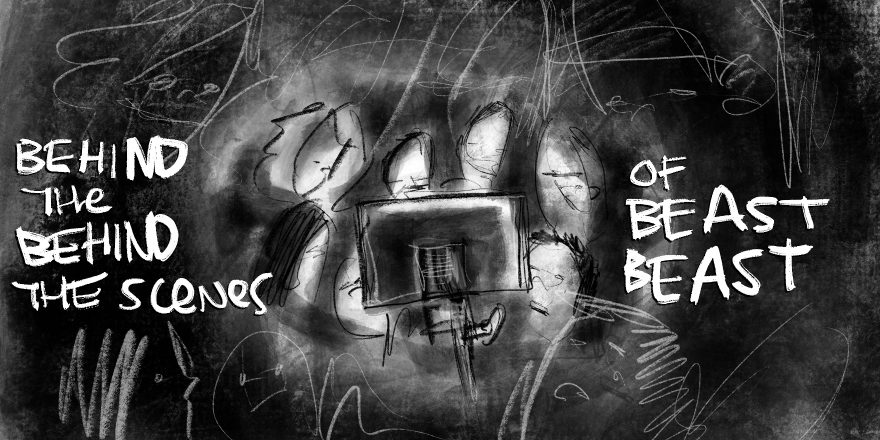 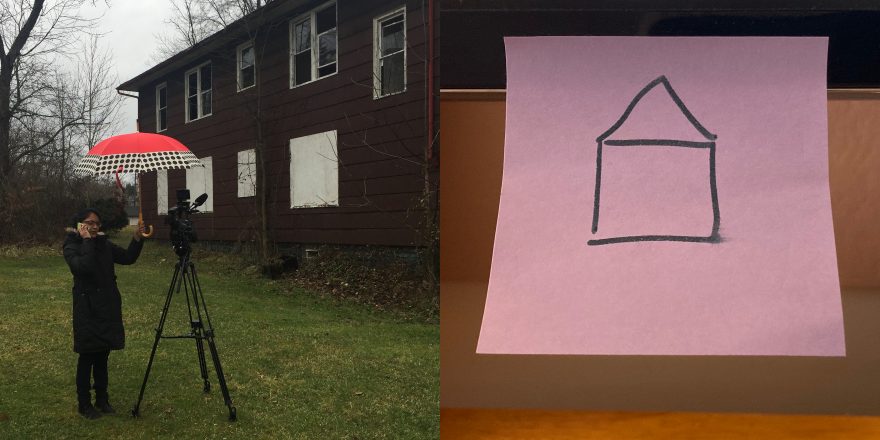