Abandoned City, the newest album from German experimental musician Hauschka, is at once restless, exuberant, and wonderfully intimate. Almost all of the tracks on this album of prepared piano pieces are named after — surprise, surprise — abandoned cities around the world. The concept is enticing but familiar territory for ethereal, cinematic music; when I heard the title I immediately thought of Efterklang’s 2012 album Piramida (based on the abandoned town in Spitsbergen, Norway), moments of Godfrey Reggio’s 1982 film Koyaanisqatsi when the cameras move slowly through deserted New York slums, propelled by Philip Glass’s solemn arpeggios, or the photo series of Detroit’s abandoned skyscrapers that pop up almost daily in the Times. But Hauschka’s album brings new twists and unexpected life to subject matter that threatens to become overworked, bringing together the best of minimalism, ambient, electronica and improvised music to evoke these poignant landscapes in a new way. As the composer himself, in the album’s bio, describes the opening track on the album: “I hear the sound of the wind blowing through a piano playing in an empty room.” This is an active loneliness, a twitching, spinning journey. These tracks rarely pause long enough to let us feel nostalgia before propelling us into a new section, led by unexpected harmonic shifts and glittering, evocative textures.

The album was created almost entirely on the prepared piano, a more-than-century-old tradition of inserting screws, paper, foil, coins, and other objects into the strings of the piano to make it sound like anything from a toy instrument to a set of gongs played underwater. Popularized by composer John Cage in the ’30s, the prepared piano has occasionally been used by musicians like Aphex Twin and Lou Harrison, but Hauschka is the first I know of who has made a musical life out of this technique. The album includes a huge range of sounds that at first listen seem to come from a string section, percussion, a sea of clarinets, a glass harmonica.  But, incredibly, almost every sound on the record originated in the acoustic piano, and has been transformed through both the preparation and Hauschka’s skilled deployment of electronic effects. In his home studio Hauschka set up nine microphones; six recorded the piano’s direct sound, and three others were connected to a mixer that allowed for delay, distortion and echo to be triggered separately or simultaneously. I was shocked to read that most of these works were created on the spot, and that Hauschka mixed the tracks live as he played them. In a fit of creative energy, he composed and recorded nine of the 10 tracks in an incredible 10 days. Despite that very quick time span, the tracks seem composed, carefully constructed, but they also maintain the vitality of spontaneous improvisation.

The opening track “Elizabeth Bay” combines a throbbing repeated bass with oddly delicate high melodies that coalesce into a dramatic descending chord pattern. It’s saturated and otherworldly, but I love feeling that I’m never very far from the source of the sound — the scratch of fingernails on wire strings, the thump of an unadulterated, low piano note. The track even concludes with the sound of Hauschka getting up from the piano bench and closing a door. At the end of “Barkersville” we even hear the delicate release of a piano key at the end. These moments of revelation on the album don’t seem twee or self-conscious, and in this context they help to orient the listener. At once, we are reminded that a man at a piano, using techniques that are over 100 years old, is behind these swirling and mysterious sounds.

The magnificent second track, “Pripyat,” named after a deserted town near Chernobyl, features pointillistic jabs that build up over a motoric rhythm. Scraping sounds mingle under a series of Ravel-like harmonies that eventually organize themselves into a lopsided dance. The final track, “Stromness” (an abandoned whaling station in the South Atlantic), is a scattering of distorted grit over a cycle of chords, all seeming to bounce and reflect off of each other like colliding concentric circles in water. “Craco,” named after a medieval Italian city abandoned to sinkholes and landslides in 1963, features the piano in its most recognizable form, with minimal effects that build up slowly. This particular track has a beautiful evolution throughout, a cycle of romantic harmonies offset by the shimmering chaos of delays and distortion.

Hauschka’s rhythms often seem drawn from an eclectic mix of Latin, jazz and techno music, but they sometimes seem less evolved than his innovative approach to harmony and texture. Once a rhythm appears in a track it is usually there to stay, and often binds the track a little too tightly to the earth while the harmonies and textures take flight around it. Still, at the risk of sounding snarky, I have to mention that I like this album so much better than a lot of the loop-based, instrumental chamber pop that has come out in the last few years — Abandoned City never runs the risk of sounding like unambitious background music or a forgettable Philip Glass imitation. OK, that’s as snarky as I get! It’s all to say that there is enough grit, innovation and surprise here to make this album stand out from the crowd.

In the middle of “Stromness,” there’s a revelatory moment where much of the electronic effects seem to strip away, and it’s as if we hear the inner workings of the machine Hauschka has created. An image popped into my head of kids in an imaginary Fellini movie sneaking backstage at a magic show, only to discover a worn-out man tirelessly turning the gears of the machine that will allow the performer to levitate. When we are allowed to see the mechanisms behind seemingly mystical moments, they have the potential to become even more beautiful and astonishing. 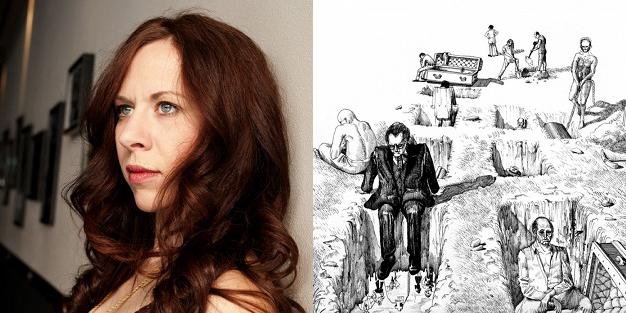