Mary Timony is the lead singer and guitarist for Helium and Ex Hex and previously played in Wild Flag. Ends With And collects Helium’s singles and compilation tracks and is available now from Matador. Catch Mary on tour playing Helium this summer and follow her on Twitter. (Photo by James Smolka.)

The earliest tracks on Ends With And, the collection of 1990s Helium demos, EPs, and B-sides that just came out on Matador, are “Termite Tree” and “Magic Box.” Those were the first songs Helium ever recorded. We lived in Boston, and we drove our van down to Philadelphia to record with a friend named Adam Lasus, who had a studio in the basement of his house in Philly. At the time, I was 22. I’d just gotten out of Boston University. I grew up [in D.C.] and went to a lot of Dischord shows and stuff—I always really loved D.C., but I found a home in Boston. To be honest, there were a few more women playing in Boston, so I probably felt like I fit in more.

I was really close to my friend Joan Wasser. Then, she was in this band called the Dambuilders, and now she is doing this band called Joan As Police Woman that’s really awesome. Joan and I lived in this apartment building on Pearl Street in Cambridgeport with Claudia Gonson from the Magnetic Fields, Greg Jacobs from Weeping in Fits and Starts, and one of the guys from the Swirlies. It was right down the street from the Middle East Club, which was where everybody played and hung out. We were in our early 20s, in bands, practicing and doing whatever you do when you’re at that age in a band… The house was really dirty, I’m sure. The walls were thin and we had a lot of mice. It was basically right on the street, and it was one of those houses that was built super cheap and super fast. My room may have been $190 a month when we moved in. Our landlord lived downstairs, and our next-door neighbor was a crack dealer. People were constantly coming to her back door, and then she would come over and borrow matches from us all the time.

When I wrote “Superball,” which is where Ends With And takes its title from, I was sitting on my mattress on the floor of my bedroom at that house on Pearl Street. I have a visual picture in my head of staring at the brown wall-to-wall carpet. I always wrote from my own experience of what it’s like to come into the world and be female, and the kinds of roles that you’re expected to fit into, the labels society gives you, and how that stuff feels to me personally. I never felt like I could write political statements in the lyrics that spoke for a bunch of people. I liked expressing myself as an individual. I had taken some women’s studies classes at BU, and I got obsessed with this writer, Mary Daly, who was this feminist theologian. I was super into her—I read her stuff and went to see her speak. And there was a lot of energy around girls playing in bands, and I found that super inspiring. There weren’t as many back then, so it was more of a statement—like you’re fighting against the world. So I was writing with a feminist theme, but from my own weird brain. I was angry about being treated like I didn’t know what I was talking about, and that women are expected to behave certain ways. It just didn’t make sense to me as a young person.

It still doesn’t, although I’m older and in a completely different place. It was kind of a while ago now, but the experience of being a woman in music really was different. At the time, rock music was really angry. I look back at the “XXX” video, and part of what I was trying to do with the aesthetics was to be shocking and confrontational, which I also see in Liz Phair, Hole, Bikini Kill, Bratmobile, Babes in Toyland—even that Meredith Brooks song “Bitch.” (It was the ’90s.) There was this thing about taking back words and images that are used to shame us—being provocative and confrontational, just trying to get people to think a little bit.

It was empowering to be able to throw these images of how women are seen and expected to behave back at the world. In a way, part of Helium’s inspiration was rap music. I loved the way Dr. Dre sounded. That’s what we were going for. Snoop Dogg’s Doggystyle was popular at the time; I had it on cassette and listened to it in my car over and over again. Helium’s lyrics partially come from that—how I was out there with, like, whatever in-your-face kind of thing. Like the whole, Just fuck it. I’m going to say anything, that you hear if you listen to those rappers.

Whenever Helium took a break from working on the record down in Philly, we played Sonic the Hedgehog. We got super into the video game music on Sonic the Hedgehog (and Road Rash, too, I think). It has this really thin and extreme kind of quality that’s cool, so we were making the record, we found ourselves thinking, Okay, how do we get it to sound more like that? We also literally tried to get the record to mimic the actual sound quality of the four-track recordings, which is pretty crappy—just flat- and trebly-sounding. It’s not a luscious, full-depth hi-fi recording. We wanted that to be the aesthetic—and also for it to sound like Dr. Dre. Super low, and super high. We just wanted to push it to the extremes. In the ’90s, there was this feeling like we were all trying to make new rock music, and we were going to invent new sounds with rock instead of referencing stuff from the past which is more what happens now, since the internet makes it so easy for musicians to reference anything they want. With the internet, everyone knows everything now, so there’s less of a “make it up yourself” vibe.

After the songs came out, I realized that, at the time, if you said you were a feminist, it meant like something to one group of people, but it meant something else completely to other people. When you’re in your bubble with your friends in a local music community, everything seems normal. But when you talk about feminism in the wider world, it’s often misunderstood. I remember Helium getting reviewed by some guys that didn’t really get what I was trying to say—which makes sense, because it’s not like I was coming out and being like, “Hey, I feel that all women should be treated equal.” It was more like I was being artistic and bringing this stuff up in a creative, weird way. I was just coming from my own brain. Still, it was depressing, and made me want to escape being political at all. I didn’t feel like talking about it anymore. The next record that we did, I retreated into a different place. Less angry, more fantastical.

When I recently relearned the Helium songs on Ends With And, I felt pretty objective. It all felt familiar to me, but it doesn’t feel as emotional, because it’s been so long ago. It’s more like somebody else that I know really well wrote these—maybe not me. I teach kids guitar, and I figure out covers a lot—the process of learning these songs felt a little bit similar. It was weird: I was like, Okay, I know them really well…but I don’t really know them. I’m pretty removed from those feelings. I was definitely in an angry place, as a lot of people are in their early 20s. Young people see the world so objectively because they’re new to it—the political anger young people have is because they’re new to seeing things that aren’t fair. Whereas, when you’re older, you see things more as they are.

Being older myself now, I get this less and less, but there’s always still the question, “What’s it like to be a woman in music?” I haven’t been asked that question as much with Ex Hex that much, or with this Helium reissue, and even up to stuff I did with Wild Flag. There are so many more women playing rock music now that it’s much more normal, which is great, but it depends on whom you’re talking to. In certain interviews, it’s just like, Jeez, I’m a musician, do we have to keep talking about what my body looks like on the outside? That doesn’t make my art. It gets very tiring after a while. The ultimate feminist thing to do: We don’t have to talk about what is it like to be a woman making art. Instead, it’s just, “I’m an artist, and I’m making art.”

—as told to Amy Rose Spiegel

Mary Timony is the lead singer and guitarist for Helium and Ex Hex and previously played in Wild Flag. Ends With And collects Helium’s singles and compilation tracks and is available now from Matador. Catch Mary on tour playing Helium this summer and follow her on Twitter. (Photo by James Smolka.) 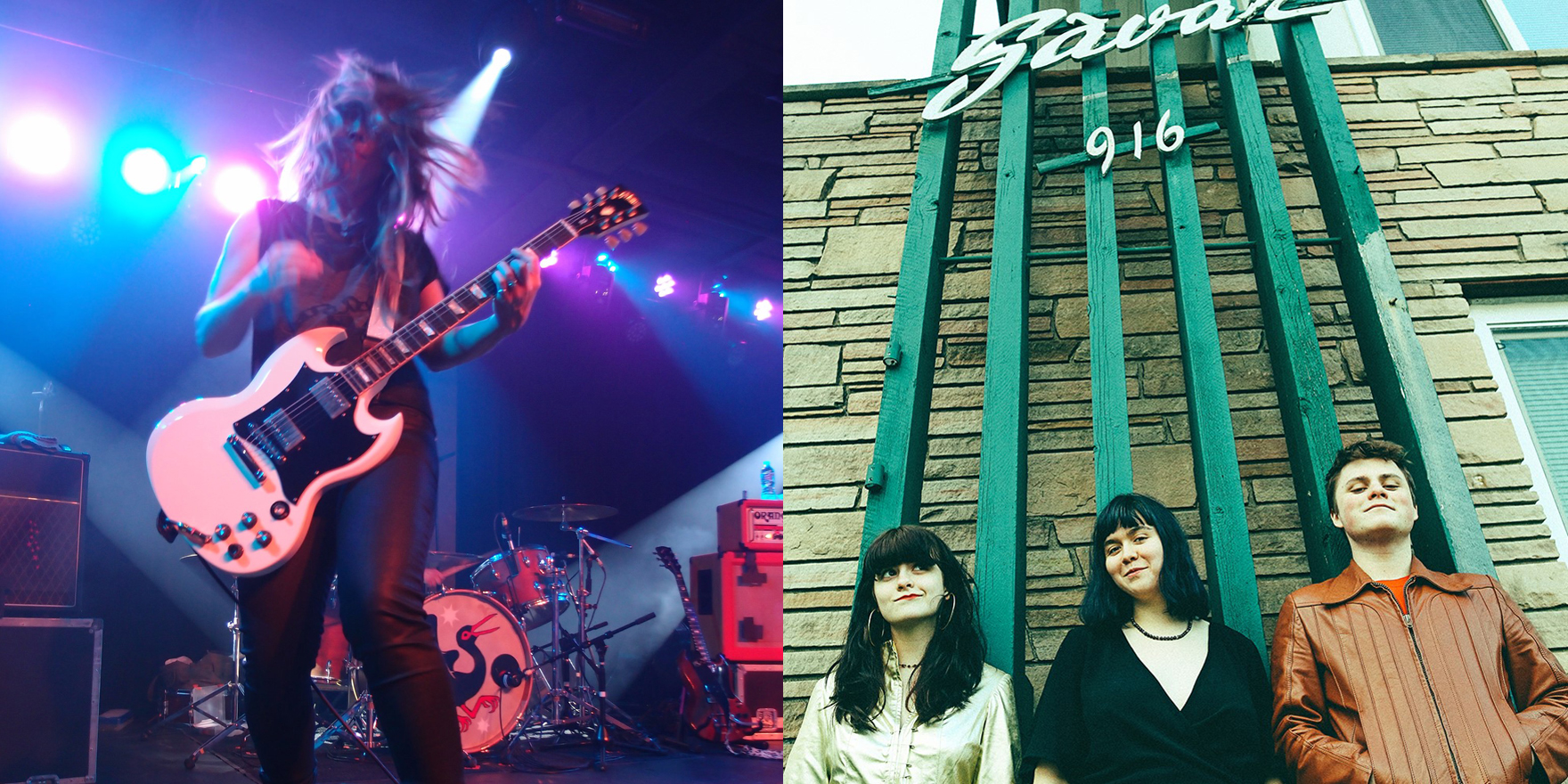