Sasha Gordon is an award-winning filmmaker and composer. Born in St. Petersburg, Russia, Sasha immigrated to the US in 1989. Sasha has scored over 50 features and shorts (among them the Oscar-winning God of Love); directed several award-winning shorts (including Manhattan Melody, which premiered at the Telluride Film Festival and went on to play all over the world); and is thrilled to have just completed her debut feature, It Had To Be You, a subversive romantic comedy starring Cristin Milioti and Dan Soder, out now through Samuel Goldwyn Films. Sasha is currently scoring Amazon’s Gortimer Gibbon’s Life On Normal Street while writing her second feature.

Ever since I can recall, a pet peeve of mine has been watching movies or TV shows with people who griped about something being unrealistic. There you are, rapt as Ross runs his fingers through Rachel’s honeyed highlights on Friends, when your (former) friend pipes up with, “Those guys would never be able to afford that apartment…” Um, yes they would. Monica’s grandmother left it to her. If you’d shut up and pay attention, you’d know.

I always devoured the Photoshopped life of movies and shows and sometimes this resulted in some major dissonance between my expectations and my reality. This dissonance has been a source of some discomfort, but also of inspiration and laughs. Here are some of the highlights:

First Kiss
The bar for first kisses was set by Reality Bites. (So was the bar for having ample bosoms that look amazing without a bra, also unattainable, but I digress.)

From what I understand, I had my first kiss fairly late. I was 15. A lot of my friends were already rounding third base at Jewish sleep-away camp. Some of these friends were also worrying about getting pregnant from swallowing; even though I was reasonably sure this wasn’t possible, I too had a pretty tentative grasp of the female anatomy so the best I could do was to emphatically reassure them by saying, “If that was true, you’d definitely have gotten pregnant by now.”

Boys didn’t seem particularly interested in me and apart from Moe, a very large 8th grader who passed me a scrawled note asking if he could “finger me after school in the locker room” (I accepted but he was a no-show), I wasn’t getting a lot of offers.

Noah was a lanky potpourri of ’90s clichés – he was a little goth, a little grunge, and he was my Jordan Catalano. Except he could read and write. In fact, he was quite good at the latter and now makes his living at it.

I know lots of teenagers are dark and brooding, but I think Noah was exceptional. If you believed Noah, most of his friends were suicidal or had already successfully ended their lives. Even at that age, I knew that these stories likely wouldn’t hold up to some fact-checking, but I didn’t care. Noah was deep, tortured and sometimes he was actually pretty funny.

The fateful first kiss happened on our second date. We’d gone to see The Nightmare Before Christmas and were strolling back to his parents’ house when he stopped and kissed me. It was happening! But, man, it was … I struggled for breath. My eyes shot open. I had the fleeting thought that his tongue was blocking my airway. I tried to remember what we had just learned in biology about the relationship between the airway and the … foodway? No, that isn’t right … Basically, I completely dissociated until it was over.

Some minutes later, we were walking again, hand in hand, and I thought, “Well, that’s it. I guess I’m a lesbian because I never ever want to do that again.” There was no way for me to know that the issue was that, though I was obsessed with Noah, I was still pre-sexual and perhaps a bit behind some of my peers in that regard. Whatever the reason, I’m certain lots of people have had pretty awful first kisses. For what it’s worth, I actually had the pleasure of kissing Noah again many years later and it was great.

Sex
Sex is, of course, an obvious subject for something that’s wildly misrepresented in film. For me – and probably a lot of women around my age – the two scenes that set the bar for what sex should be like were the pottery scene in Ghost and the “Take My Breath Away” scene in Top Gun. As teenagers, my girlfriends and I reenacted these scenes (I was always the dude) many, many times. Too often publicly. Ew …

I lost my virginity to my high school boyfriend, Jason, after seeing Baz Luhrmann’s Romeo + Juliet. The main event was actually pretty vanilla. We were lucky enough to be comfortable with one another and just high enough to enhance said comfort level. It was the aftermath that left something to be desired.

I thought we were both virgins but then Jason informed me that he was only “kind of” a virgin. Kind of? Turned out he’d had sex with another girl, but just one time. Maybe one-and-a-half times?

Like many teens of my generation, I was petrified of AIDS and thanks to a successful effort by the Board of Ed was pretty convinced I would succumb to the disease if I so much as glanced at a penis. Here I was having just had sex with someone who’d had one whole other sexual partner! I quickly played out telling my immigrant parents that they’d worked and struggled to bring me to this land of opportunity only to see me die at the tender of age of 17.

Never mind that Jason and I had used a condom (if I had my way, we would’ve used two), I still got on the phone with an HIV hotline to make sure that I didn’t need some sort of emergency cocktail? Like on ER? The nice lady on the other end patiently reassured me that I was probably fine, but dutifully suggested we both get tested just to be safe.

Romance
I have watched Pretty Woman, Notting Hill and Good Will Hunting so many times I should be embarrassed, except I’m not, because they’re awesome movies.

Lingerie:
Lingerie never fits me. I have huge boobs, and not so much in the ass or hips department, so anything that fits me up top looks like a potato sack down below.

Music:
Even if you try to make a romantic mix, always, always by the time you’re finally reaching the crucial moment the playlist changes and suddenly you’re listening to Hans Zimmer’s soundtrack to The Rock.

Flowers:
In the privacy of my home, sure, but in public? Just shoot me. Walking around clutching a bouquet – or even worse – a single rose, I’d rather wear the yellow Star of David or a Scarlet A.

Proposals:
When my boyfriend proposed, it was something like a scene from a movie. A horror movie. It was so traumatic, I made a movie about it.

Requited Love:
The absolute worst is when you’re 20, and you’ve been longing for some guy to return your affections for months, maybe years, and then he finally does! And suddenly, his cool, glazed look is gone and he’s gazing at you with all the desperation and sex appeal of a puppy in an ASPCA commercial (cue Sarah McLachlan song) and you just want to run away as fast as you can.

Trying To Have a Baby
OK, so this isn’t a movie cliché but I still got most of my info on the subject from TV/film and from what I gathered, when people decided to have a child it usually went something like this: two beautiful people gaze into each other’s eyes and one of them (usually the man) says breathlessly, “Let’s make a baby!” And then they make a baby.

I wasn’t so naive as to think it would be that quick, but I didn’t think that for two (relatively) young and (relatively) healthy (OK, I only have half an ovary) adults it would be more like committing to going to the gym every day after lapsing for years.

Sure, the first time you get in bed with your husband after going off birth control it’s all excitement and giddiness. We might make a person tonight! (After this new episode of Louie.)

But then a few months later, there you are, screaming at your husband for saying something like, “I think that shirt would work better on someone taller” (read thinner, you’ve taught him that much) when your phone vibrates in your pocket reminding you you’re ovulating, and you have to deftly turn the conversation around by saying something like, “You know you’re so sexy when you say stupid shit like that,” and use all your feminine wiles to get this doofus into bed (whom you’re not even sure you want to have a baby with at this moment) because your OB just told you, “There are really only about three days a month that you can get pregnant, so in a year … well, you can do the math.” (I couldn’t, I was in stirrups.) So he went on to explain that I had about 100 fertile days before I went from my already “advanced maternal age” to my remaining ovary becoming one of those dried, prickly rattling seedpods that fall off the trees in New York toward the end of autumn.

And don’t even get me started on seeing your baby for the first time on an ultrasound. It’s impossible. A hoax. Even with my husband and the technician impatiently poking at the screen, I couldn’t see shit. The pressure was so intense, I finally caved like Amanda Knox and gave a false statement – “I see it!” I yelped through tears of frustration. As the pregnancy went on, it turned out my husband had an almost savant-like ability to read the ultrasound screen. I was both frustrated and a little turned on by this display. He’d rattle off names of bones (Tibia! Fibula! WTF? How does he know this??) and the technician would smile and nod approval. She’d glance at me like, I hope you know you’ve got a winner here.

I will say, a few months later, once the fetus was out of the crustacean phase, I was sometimes able to decipher the image, and that was pretty damn great. Especially once the doctor diligently pointed out all the parts that could be missing, but weren’t. Phew.

Sasha Gordon is an award-winning filmmaker and composer. Born in St. Petersburg, Russia, Sasha immigrated to the US in 1989. Sasha has scored over 50 features and shorts (among them the Oscar-winning God of Love); directed several award-winning shorts (including Manhattan Melody, which premiered at the Telluride Film Festival and went on to play all over the world); and is thrilled to have just completed her debut feature, It Had To Be You, a subversive romantic comedy starring Cristin Milioti and Dan Soder, out now through Samuel Goldwyn Films. Sasha is currently scoring Amazon’s Gortimer Gibbon’s Life On Normal Street while writing her second feature. 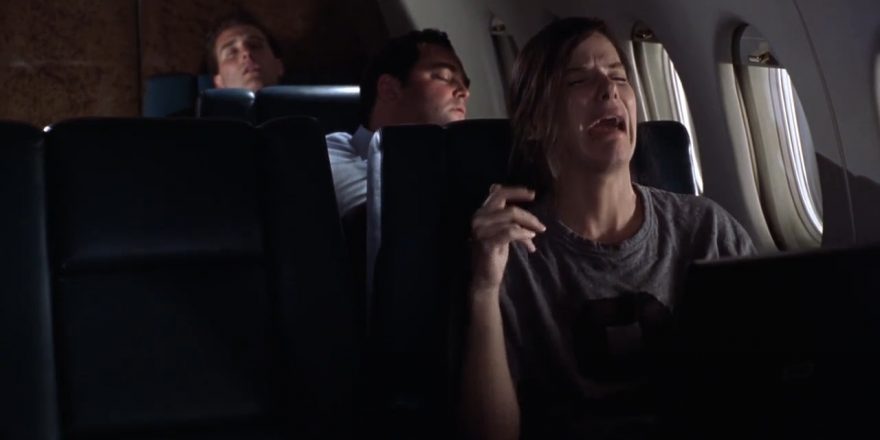 Getting Weepy Watching Movies on Planes