Kurt Braunohler’s debut comedy album How Do I Land? is available on Kill Rock Stars.  His podcast The K Ohle with Kurt Braunohler can be heard weekly on Nerdist Network.  Kurt performs in and co-hosts the weekly variety show Hot Tub with his comedy writing partner Kristen Schaal and is a regular on Chelsea Lately. You can follow him on Tumblr here and on Twitter here.

First things first, I like the Hold Steady. And, full disclosure, I opened for them (doing stand-up) a couple of times last year. Opening for a rock band doing stand-up can often be like trying to put a sweater on a dog: they usually don’t understand what’s happening, and they either get angry, or just ignore you. I did a show in Brooklyn once where a guy just yelled “FUCK YOU!” constantly for the entirety of my 20-minute set. It became almost magical after 10 minutes or so. Almost. Opening for the Hold Steady had always been a dream of mine, so I was pretty excited. The Boston show was actually pretty great. The New Jersey (my home state) show was tougher. The sound was set for a band playing to a room filled to capacity; I was one man going on first in a quarter-full room. It was the hardest time I’ve ever done stand-up — not because of the crowd, but because my amplified voice would echo off the concrete walls and come back to me a split-second later. It was like trying to tell jokes at the bottom of an underwater canyon. I left the stage pretty dejected. But then the Hold Steady came on. I got drunk with my friends, we grabbed each other, we danced, we smoked inside (that was a bad idea), and all was right with the world again.

And somewhere in there is what I love about the Hold Steady. My whole idea of them is inextricably wrapped up with the people who love them. I have a tight group of friends that I grew up with on the Jersey Shore, all ex-Catholics, who treat the Hold Steady a little bit like religion: shows are Mass, the lyrics are Scripture, and drugs are Communion. In a weird way, I guess I really like the kind of people who like the Hold Steady. They tend to be latent romantics who spend too much time in bars, who care so passionately about music they’ll fight or cry over it. They’re tough-seeming, weepy sentimentalists coated in nicotine and soaked in beer. They’re my people.

And the Hold Steady’s latest offering Teeth Dreams, coming out on the tenth anniversary of the band’s formation, marks their entry into legacy status. This album feels like the East Coast to me. It reminds me of the Jersey Shore boardwalk in the winter — not when there’s snow, just when there’s no people. Walking in Asbury Park in February, you can feel the energy of the summer even though it’s not there. You can feel the ghosts of teenage make-outs under the boardwalk and the wide-eyed optimism of summer. But it’s not that now. It’s slightly beat-up and forlorn, but it’s also more personal. It’s fucked up — but it’s your kinda fucked up. That’s not to say there’s a bunch of weepy songs on the album, there’s not. It’s a very exciting album. But it’s an album that understands that what has come before is responsible for who we are now, even if we’ve changed. And we always change.

Even the East Coast changes. The East Coast was created out of our adolescence as a country. And I love it for that. All the rough spots are still visible; it’s filled with mistakes. It’s filled with Newarks and Fresh Kills and Pennsylvania Turnpikes. It’s like we did all this shit before we knew any better. We tried to get it right as we headed west, trying to preserve some aspect of what made this country a big, wild treasure chest. But we still fucked it up. We just can’t help it. But fucking things up, even with the best of intentions, is what the Hold Steady is all about. The Hold Steady understands that glory fades, and what’s left is just you. And that’s OK. Fuck, it’s better than OK, it’s something to be celebrated, man.

And this album has everything you’d want from a Hold Steady album: it’s nostalgic, it’s big, it’s steeped in that Craig Finn mythos, and, of course, it fucking rocks. And the production on the record is excellent, from the way there’s the very subtle sound of a cigarette being lit and inhaled on “Big Cig,” to the almost hidden guitar lick in “Spinners.” And like a lot of Hold Steady albums, it’s filled with a palpable, unrealized longing. And Craig Finn can still write about women I know: the fucked-up, magical ones, women whom I’ve loved and who scare the shit out of me. And they’ve got lyrics you want to shout at the top of your lungs while walking around town getting drunk, like in “I Hope This Whole Thing Didn’t Frighten You,” the opening track: “They never care if it’s true, as long as they got something to prove — AND THEY ALWAYS GOT SOMETHING TO PROVE!”

I’ve always felt that the Hold Steady’s music is very conscious of Death; aware that Death is always waiting in the wings, like some weird creeper at a party. And I can hear that in Teeth Dreams. But it doesn’t let them stop the party. And that’s what this album is: a triumph, an explosion, a raging against the dying of the light.

Thank god for the Hold Steady.

Kurt Braunohler’s debut comedy album How Do I Land? is available on Kill Rock Stars.  His podcast The K Ohle with Kurt Braunohler can be heard weekly on Nerdist Network.  Kurt performs in and co-hosts the weekly variety show Hot Tub with his comedy writing partner Kristen Schaal and is a regular on Chelsea Lately. You can follow him on Tumblr here and on Twitter here. 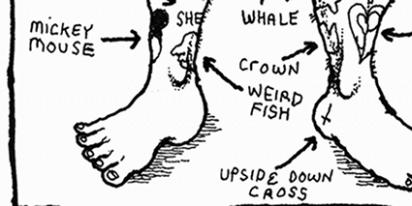