I really wanted to love 5 to 7. That’s why I chose to write about it. The plot is so appealing. A young man living in New York City falls in love with a married woman. Her only rule is that their relationship be confined to the hours of 5 p.m. to 7 p.m. The young man is Brian Bloom, played by the babyfaced Anton Yelchin, and the woman is Arielle, played by Bérénice Marlohe (whom I’ve not seen before, but who is so beautiful that when her character admits she was a model in a former life, you have to think that the line was added in after casting).

I love romantic movies. When Victor Levin, the writer-director of 5 to 7, wrote recently on the Talkhouse about romantic comedies, I eagerly read it. This film is described as “a romance with comedy for grown-ups.” I’m a grown-up and I love romances with comedy. I was excited about this film in particular because of the possibilities it held. The story of a happy, functional open marriage. Does that exist, I wondered? Could it even work? My interest, of course, lies not with the 24-year-old naïve protagonist but with the 33-year-old married woman with children. This is because… I’m a 33-year-old married woman with children.

I’ve been married for eight years, and I’ve figured a lot out about relationships and marriage with my husband. What I haven’t quite figured out is the notion that once people take their marriage vows, they will forever and always be content with sleeping with only one person for the rest of their lives. My husband and I are very honest with each other and we don’t pretend only to be attracted to each other for eternity, but an open marriage… seems so complicated. The prospect of a marriage that deals with this, a marriage with children, no less, is a very attractive plot device. In most films, infidelity is the result of an unlovable spouse, whereas in this film it seemed the opposite would be true. So in 5 to 7 I was hoping for some insight into relationships, some honesty about being attracted to people outside your marriage, some perspective on navigating something like that.

What I got instead was a young man’s fantasy. And, like any fantasy, things didn’t always quite add up. Dialogue was over-written, always witty, everyone saying exactly the right thing in the most intellectual way. Even the awkward moments felt like a table read. And the biggest flaw, which is overlooked in every male fantasy, is why would she fall in love with him? I could buy that she wants to have sex with him, even go to the movies with him. But I don’t believe for a moment that she falls in love with him. This guy is awkward, immature, and he can’t tell his red wine from his white. This is a beautiful (former model!), smart, wealthy woman with wonderful children and a handsome husband who doesn’t mind her sleeping around once in a while. Why would she ever, ever leave her entire life behind for a 24-year-old aspiring writer who seemingly doesn’t have a job or any friends? It didn’t add up for me. But mostly, I found this film was not about what I wanted it to be about.

It did come close at points, or rather, there were points when I was hoping it was coming close. Arielle’s husband Valery (Lambert Wilson) invites Brian to dinner at their home and introduces him to his mistress, Jane (Olivia Thirlby). Seems like they would have a lot to talk about! Turns out they don’t. Jane is eager to help Brian with his fledgling writing career for some reason, but doesn’t have much to say about them both having affairs with the same married couple. She responds with, “I’m 25, I have my whole life in front of me,” as though every 25-year-old sleeps with a married man. Another “almost” moment is when Brian is asked to babysit Arielle’s children for an afternoon. He takes them to Central Park to teach them how to hit a baseball. Arielle’s young daughter says, “Brian, I’m so glad you are my mother’s boyfriend.” What? Did I hear that correctly? The kids know? Now that’s something I’d like to look into more. What are those conversations like? But like so much here, it is glazed over and left unexplored; instead we are given clichéd narration and sappy endings.

I’ve always imagined bad reviews from critics are written with a sort of smug satisfaction, and maybe they are, but there is no satisfaction here. Having come in to the film with much hope and anticipation, I felt only disappointment. As a filmmaker, I hate to write anything bad about anyone’s work, as I can only imagine they try as hard as I do to do a good job achieving their vision, and to make films that people like. I am happy to say that I did find one silver lining in watching 5 to 7 — there is still a film here that has yet to be made. 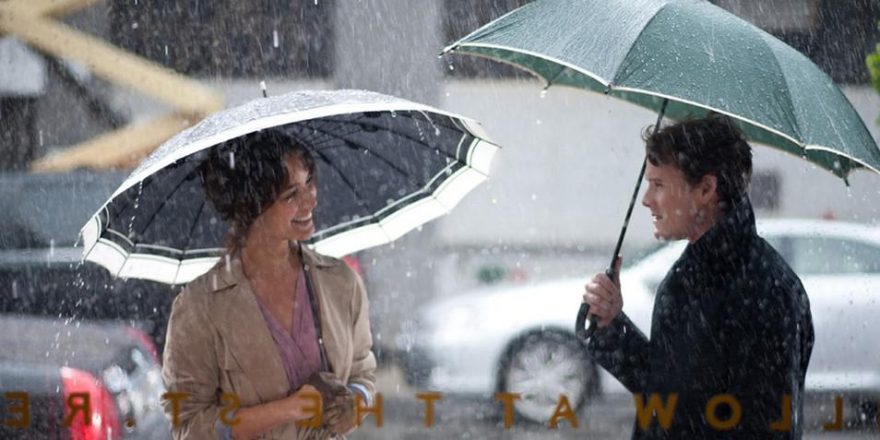 Victor Levin (5 to 7) Talks the Death of the Romantic Comedy: Was It Murder or Suicide?