I’ve always been obsessed with “carte blanche” films: the movies filmmakers make when they can do whatever the hell they want without limitations on their imaginations or resources (usually when they’re coming off a hit). It says a lot about who they really are, and what they’re most interested in – if you want to know the difference between Cameron Crowe and Gus Van Sant, just ponder the fact that Crowe’s carte blanche movie (following Jerry Maguire) was the heartfelt, painfully specific autobiography Almost Famous and Van Sant’s (following Good Will Hunting) was essentially a studio-financed art-school exercise, a color “cover version” of Psycho – the one remake no one at the studio or in the audience wanted (for the record, though, I loved it). More often than not, filmmakers create their most personal, idiosyncratic works when they’ve got carte blanche. Consider Walter Hill following up 48 HRS. with Streets of Fire, or William Friedkin blowing all the commercial credibility he’d earned on The French Connection and The Exorcist with Sorcerer (a flop, but by far his best film). One of my favorite movies of last year, Martin Scorsese’s Silence, was a carte blanche film – a movie of profound intent and exquisite craft with zero mass appeal that Scorsese was allowed to make because he had just directed the enormously popular The Wolf of Wall Street.


Actor, writer and producer Adam Sandler is a fascinating case in this regard, since for the past few years he’s done nothing but carte blanche movies thanks to his Netflix deal, which gives him generous budgets (reportedly between $40 and $80 million) and total creative control. To people with only a passing knowledge of Sandler’s work, the word “control” might seem poorly chosen – he’s frequently accused of sloppiness and poor taste – but a close look at his oeuvre reveals a method to his madness, and a fierce and probing comic sensibility. Starting with his first starring role in Billy Madison, Sandler has built a career out of playing the kind of man-child that’s been a staple of American comedy since John Belushi’s Bluto Blutarsky in Animal House – a character that’s pure id, driven by cravings for sex and food and beer and an infectiously liberating refusal to behave in any recognizably mature fashion. In his best and funniest films – Billy Madison, You Don’t Mess with the Zohan, That’s My Boy – Sandler is Belushi on amphetamines, an unbridled Tasmanian devil of vulgarity unapologetically whirling through the movies at top speed.

Even in his more restrained comedies, such as The Wedding Singer, Big Daddy or the ironically titled Grown Ups movies, in which Sandler is ostensibly a functioning adult member of society and committed family man, the underlying tension is between the characters’ responsibilities and their insatiable desire to behave like juvenile imbeciles. Again, this is nothing new, and the man-child figure in American comedy has proven remarkably durable since Belushi’s time, as Judd Apatow practically invented a new subgenre with his approach to the topic of men resisting adulthood and its obligations. What Sandler brings to the theme that separates his protagonists from those in Animal House, Caddyshack, Old School, Knocked Up and Hall Pass, among others, is his explicit acknowledgement of the rage at the core of men who won’t grow up and can’t relate to women, or to adult society in general. Sandler’s men can be sympathetic, but they aren’t inviting and innocent in the way that Belushi or Will Ferrell’s man-children are; they’re violent and frequently scary. The best movie of Sandler’s acting career, Paul Thomas Anderson’s Punch Drunk Love, presents him as a borderline sociopath, and Apatow made his best movie, Funny People, by casting Sandler as a loose version of himself and digging deep into the resentment at the heart of not only many American men, but of most American comics.

The anger at the core of Sandler’s persona is both its strength and one of the reasons why his movies don’t always work as conventional narratives; the misshapenness that critics tend to find in his work is inextricably connected with the fact that his id cannot be contained by classical dramatic structure (I’m talking about the movies developed and produced by Sandler’s own company, Happy Madison, not for-hire acting jobs like Sandler’s underrated and very effective leading man turn in James L. Brooks’ Spanglish). Yet, I don’t think they’re sloppy in the way his critics think they are; the movies are all over the place, with crazy digressions and incongruous shifts in tone, but they’re propelled by Sandler’s remarkably consistent preoccupations and the intensity of his dedication to each of his characters, from Madison to Bobby Boucher in The Waterboy to Zohan. His talent is one of utter fearlessness – I can’t think of any American actor outside of Jerry Lewis, to whom Sandler is often compared, who would commit so wholeheartedly to both the unpleasantness and the pathos of a character such as Jill in Jack and Jill. She’s a remarkable comic creation, but I think Sandler’s full-throttle characterization here and in other films makes people uncomfortable – as it’s supposed to – and they mistake their own discomfort for some kind of ineptitude on the part of the filmmakers.

For evidence that Sandler and his collaborators know exactly what they’re doing, one need look no further than the latest Happy Madison production, Sandy Wexler. It’s the third and by far the best of Sandler’s Netflix “carte blanche” movies, following The Ridiculous Six and The Do-Over. It encapsulates the social anxieties touched upon in Sandler’s previous work but finds a new, surprisingly unified form for them. The ramshackle, wandering pace of The Ridiculous Six and The Do-Over is gone, and the film moves briskly in spite of checking in at a whopping 131 minutes. A great deal of the credit has to go to Sandler’s conception of the title character, a Broadway Danny Rose-esque talent manager who’s a social misfit in a world – the Hollywood entertainment industry – where social graces and skills are more important than heart, talent or brains. Sandler plays Wexler with, as usual, total commitment and total empathy; his awkwardness and neediness are so unsettlingly naked at times that the film resembles Taxi Driver as much as any broad farce. Sandler’s gifts for physical comedy make the film work on that level too, as Wexler’s unease in the world manifests itself in a series of hilarious slapstick blunders and sight gags that feel of a piece with the movie’s more naturalistic, even romantic, moments.

Like most of Sandler’s movies, Sandy Wexler is jammed to the hilt with supporting players and asides, but they feel more organic here than in some of his other films thanks to the premise (which justifies digressions involving Wexler’s many clients and contacts) and to director Steve Brill’s firm tonal grasp on the material. Brill has long been an underrated comic filmmaker. His debut film, the Apatow-scripted Heavyweights, is one of the funniest movies ever made; a summer camp movie with a balance between cruelty and heart that Brill would later refine on several Sandler pictures, as well as 2014’s very entertaining Walk of Shame. (Interesting trivia: Brill also played the barfly who harasses Andie MacDowell in sex, lies, and videotape). Here, he sustains the comic energy of the script by Sandler, Dan Bulla and Paul Sado for over two hours with unforced but expressive compositions and cutting – not to mention the most elegant lighting in any Sandler film, courtesy of Oscar-winning cinematographer Dean Semler (Dances With Wolves).

Semler has been part of the Sandler family since the beginning of the Netflix deal, which brings me back to the “carte blanche” idea. Sandy Wexler is set in the 1990s, and the evocation of period is extraordinary. If, like me, you lived in L.A. at the time the movie takes place, you can’t help but be awed by how right Brill and his team get every single detail; from the recreation of Tower Records and the myriad cultural references to the layered sound design, in which L.A. disc jockeys and other touchstones of the period can be heard wafting in and out of the background. The music cues are all impeccably chosen for both comedic and dramatic effect, establishing tone and context for some scenes with swift immediacy, and the concert and party scenes are generously populated with period-accurate extras. My point here is that part of Sandy Wexler’s greatness comes from the way it sweats every detail in the frame at a time in film history when most movies don’t. They can’t, because they don’t have the resources – the very mid-range films that were being made on a regular basis during the time in which Sandy Wexler takes place are almost gone. The only place they seem to live now is on streaming services like Netflix or Amazon, which recently gave another very different filmmaker, James Gray, the carte blanche he needed to shoot The Lost City of Z the way he wanted (on film and on location).

Sandler uses his freedom to reach different ends than Gray, but his film is no less personal or deeply felt. Sandy Wexler is presumably Sandler’s tribute to his own longtime manager, Sandy Wernick, and his intimate connection to the piece is made clear by the first four and last three letters of the protagonist’s name. Although Sandler performs with enormous glasses and a series of vocal affectations (including a truly hilarious fake laugh), he doesn’t seem to be putting up any barriers between himself and the audience, as Sandy Wexler provides the most direct line between his neuroses and the audience since Punch Drunk Love. It also brings new depth to his persona, trading most of the anger for a sort of world-weary sadness that gives way to enlightenment – it’s what you might get in a movie if Travis Bickle or Rupert Pupkin suddenly became self-aware. I wasn’t entirely sure of what to expect when I sat down to watch Sandy Wexler, but even as a Sandler admirer I know I wasn’t expecting something as rich as what I got. I’m excited by the prospect of him using the carte blanche status he enjoys at Netflix to continue expanding his ambition the way he has here. 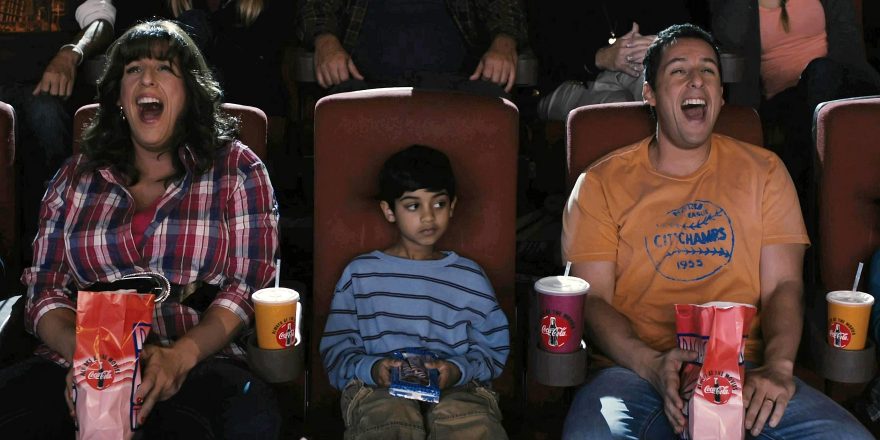