The Rocket Summer is the project of multi-instrumentalist, producer, songwriter, and performer Bryce Avary. His latest album, Sweet Shivers, is out August 2.

I sometimes give stories behind the songs, but not always the artwork connected to them; however, this album cover and its artwork demand some explanation. I snapped the photo that became the cover of Sweet Shivers in 2017 during a moment in time when my life admittedly just felt a little upside down. I was newly in a different state attempting to begin writing a new album, sitting at a table pondering multiple circumstances of my life and the life around me, just feeling a very deep sense of confusion with some tangible heartache. While there, a honeybee landed directly in front of me and wouldn’t leave, despite my natural reaction to shoo it away. It just kept coming right back, landing in the same spot inches from me. I had this powerful sense as if it was almost trying to communicate with me, as mystical as that may sound. 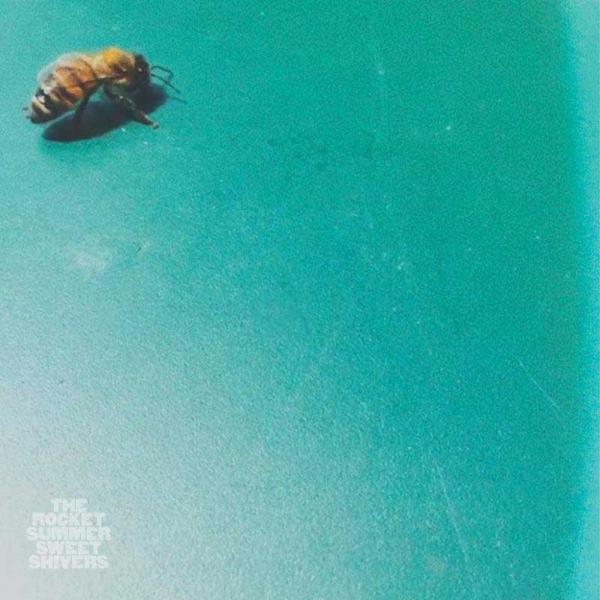 As I gazed at the bee, I couldn’t help but notice the stunning contrast of its colors against the teal table, so I decided to pull out my phone and start filming it. While doing so, I felt in my soul there might be a deeper metaphor in what I was perceiving to be a distinctly unique experience encountering this bee. Perhaps there’s a song in this that it’s trying to tell me to sing? Perhaps there’s a story it’s trying to communicate? Perhaps it’s simply just being used as a catalyst for me to look deeper to find out what that story is? After I left, I kept thinking about the bee so I began looking into their nature. The thing that shook me is when I learned that bees see flowers differently than humans. They see things we can’t; they see colors differently. At that moment I realized maybe there’s beauty in seeing from a different perspective, especially when life feels confusing. What if there’s a bigger picture? What if when there is uncertainty, there’s something precious to learn from it? Perhaps there is new color in the dim, mysterious, desert-like places of life? Maybe I need to be more like the bee? Maybe there’s beauty in simply resting in the unknown, and growing from simply not knowing…

Within the album artwork are flowers in split vision the way humans see them, and the perceived way that bees see them to illustrate this idea. Garrett DeRossett, a TRS fan and designer who reached out to me on social media to see if I’d ever need artwork trudged through this with me to make this vision come to life, and for that I’m grateful.

The album title itself, Sweet Shivers, comes from a lyric in a song called “Blankets.” It’s referring to an emotion: a feeling of excitement and joy in the unknown, even if the unknown itself is more dressed up in less than ideal feelings of uncertainty. A letting go of sorts; beauty in the free fall.

For as long as I’ve heard and made music, the notes and the songs themselves have always evoked colors in my mind. Particularly with songs I write, new or old, they all are the same colors when I hear them now as they were at their birth. Songs are deep and royal blues, dark and light greens, solid blacks, whites, reds, golds, and pinks, and sometimes mixtures of several. “Morning Light” to me is a trio of yellow, black and white which eerily reminds me of the bee on the cover of this record. I’ve been told my whole life this is called synesthesia, but to me, this is something I believe everyone has to an extent. We all live inside a lifelong mental and spiritual battle of sorts in choosing to believe that we are alright when the noise and “the voice” in its cunning way attempts to tell us otherwise. The noise of your future, the noise of your past, the noise of the right here and now. This song is about shedding light onto that darkness of the mind that is trying to shadow and drown the colors that give day-to-day life its beauty. A bit of a mantra: lean into the colors, silence the voice.

The colors are already there, but do you see them? I sometimes can… and I sometimes can’t. But this song is about choosing to at least stay in the fight to always keep my eyes open looking for them.

Sweet Shivers will be out August 2 and is available for pre-order now.

The Rocket Summer is the project of multi-instrumentalist, producer, songwriter, and performer Bryce Avary. His latest album, Sweet Shivers, is out August 2.