[SPOILER ALERT] This is not a date night movie. In fact, it’s quite a bummer. But if a movie is great art, it surpasses and triumphs over the downer elements of it. Like all good art, it lifts you up even if it’s dragging you down. If art is supposed to tingle your nerve endings (as well as make you want to throw up a little), then this is it.

You Were Never Really Here (if that’s not the worst title ever, please don’t hesitate to let me know what is) is the most upsetting and beautiful new movie I’ve seen since Bertrand Bonello’s equally upsetting and beautiful movie Nocturama (2016). Lynne Ramsay’s new masterpiece is not the kind of movie that you go to for the plot or the story. Not that there isn’t lots of both. But the way that it’s told is so refractive and elusive, the story itself will not and cannot suck you in. The movie is an accumulation of brilliant jagged details — destabilizing and disorienting close-ups and medium shots that are all beautifully framed, accompanied by spectacular needle-drops from the ’40s and ’50s to the present as well as electronic music by Jonny Greenwood, and razor-blade precision sound editing. Shot piles up on shot in explosive little jabs and compulsive jolts until you realize that all of it is in the service of the larger plan — the story, after all.

The film, in a sense, is like a dazzling kaleidoscope made up of hundreds of moving parts in which a slight turn of the tube reveals a new cluster of dazzling and disturbing images. To put it another way, Ramsay offers you all the elements of a stained glass window displayed as unrelated fragments on the floor, like a huge jigsaw puzzle, and the spectator is invited to join in, to piece the elements together to make it work. But if you think all of this is going to be in the service of a highly refined art movie (like Last Year at Marienbad or Muriel), guess again. The story, as it slowly reveals itself, couldn’t be pulpier — a severely screwed-up but effective hit man, probably a veteran, who was seemingly abused as a child, is in the business of tracking down young girls who have been abducted for sexual slavery. Since most reviews and reviewers mistakenly confuse recounting the plot as describing the movie, I doubt that it’s useful to do so with a Lynne Ramsay movie. It’s not the what that’s important but the how. If you want to find out who does what to whom and when, you are invited to look elsewhere, like the New York Times.

But just to give an example — [SPOILER ALERT] Phoenix has just shot the gunman who may have just killed Phoenix’s mother, Judith Roberts, a woman in her eighties, the still beautiful woman who played the Beautiful Girl Across the Hall in David Lynch’s Eraserhead (1977). The gunman is lying on the kitchen floor in Phoenix’s house, bleeding to death. Phoenix lies down on the floor next to him. The two of them in hushed tones, spontaneously, as if in a trance, start singing along with a song that’s on the radio, “I’ve Never Been to Me” sung by Charlene. (The lyrics are “I’ve been to paradise / But I’ve never been to me… — a phrase that strangely rhymes with the title of the movie). The dying man clasps Phoenix’s hand into his own until he dies. It’s a beautiful, shiver-inducing scene that probably has no impact whatsoever on the printed page but on screen suggests in a very short scene, in very precise strokes, compassion, forgiveness, and a tolerant, world-weary resignation of the way the world works — and the way that popular culture binds us all together whether we like it not.

It’s very hard to imagine what the script for this looked like because so many of the as-yet moving parts (the music, the sound effects, the editing) didn’t yet exist prior to the filming. Nor do the ellipses from one shot to the next. In a way, each cut brings us to another space and/or another event. And the script probably contains no more than five pages of dialogue. Paradoxically, it won an award at last year’s Cannes Film Festival for best screenplay (shared with Yorgos Lanthimos’ The Killing of a Sacred Deer). The script, I dare say, was all in Lynne Ramsay’s head and only she (and then, later, her editor, Joe Bini, who also edited her previous film, We Need to Talk About Kevin) knew how it would and could come together. It’s an amazing achievement. One can clearly see why she might not have been able to accommodate her non-linear, untransferable-to-paper approach to a so-called “normal” script. In 2013, she walked out, to a great deal of unfavorable press, of the production of the Natalie Portman vehicle, Jane Got a Gun, just a few days before shooting began. Although no one has publicly revealed the exact details about why she left, it seems to be pretty clear from her previous pictures, and surely from this one, that she is not a director who could comfortably work in a formulaic Hollywood movie.

This kind of moviemaking is not for the faint of heart, either for the filmmaker or the viewer. The comforts of old-fashioned well-built constructions like The Post of wide-shot, medium shot, close-up, reverse close-up, over the shoulder shots, people entering and leaving the frame to deliver their lines and interchanges, where all the “i”s are dotted and the “t”s are crossed — that won’t work in Ramsayland.

Equally surprising as its Cannes win for Best Screenplay is that Joaquin Phoenix, looking like an exhausted Old Testament prophet who’s seen too much of life, has about two-and-a-half pages of dialogue, won the Best Actor award at Cannes. Not that he’s not good. He’s very good indeed, intense and vulnerable, but he’s virtually monosyllabic. He is a rippling, burly slab of controlled violence and dispassionate fury, whose weapon of choice is a newly bought ball-peen hammer. If the movie seems excessively violent, very little of the violence takes place on screen. It’s always behind the door, the wall, the end of the corridor — away from the peering nosey eyeball of the camera. The blood that’s all over the place indicates that the violence that has already happened. Scenes are truncated. People do not enter and leave the frame. Fragments interrupt other fragments. Shards of scenes poke their way into other scenes. We enter in the middle of an action, with no beginning or end. The slivers of backstory (in very short jabbing shots) don’t begin to explain what we’re watching. Nothing explains anything. Yet it’s a glorious, abstractly constructed mélange of all the elements movies are supposed to be about but rarely are — sound(s), image, texture, mood, thrown together in a mixture which never privileges image over sound or vice versa. Each element relies on other elements to evoke and corroborate its cumulative effect. I don’t think it’s hyperbole to suggest that Ramsay has added to and changed film language as much as Antonioni and Bresson did in their day, and as Welles did in earlier decades. With this film and her earlier We Need to Talk About Kevin and Morvern Callar, Ramsay clearly establishes herself as one of the handful of great directors of the 21st century.

film commentary
Lynne Ramsay
Mark Rappaport
You Were Never Really Here
WeTalk — Latinas En Media: Robyn Moreno and Cristina Costantini
How Having A Baby Made Me Fearless (and Crazy) Enough to Direct My Debut Feature 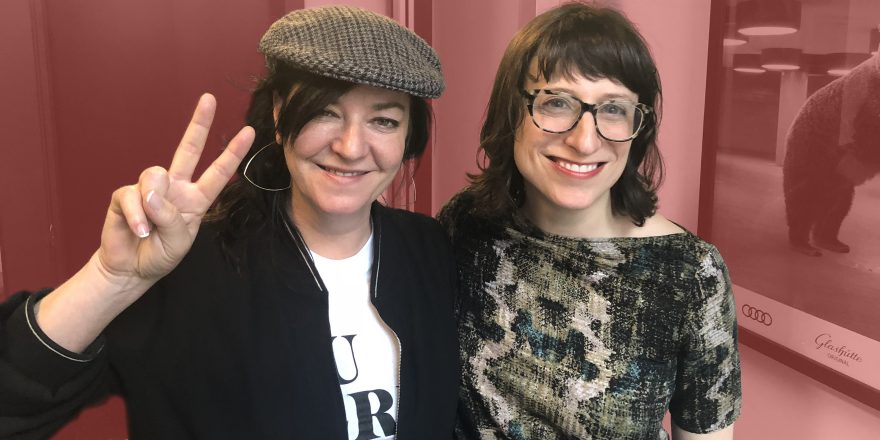