Martha Stephens’ latest feature, To the Stars, a ‘60s-set coming-of-age drama starring Kara Hayward, Liana Liberato, Jordana Spiro, Shea Whigham, Malin Akerman and Tony Hale, premiered at the 2019 Sundance Film Festival in the U.S. Dramatic Competition and is available on VOD. Stephens is a graduate of the University of North Carolina School of the Arts directing program. Her micro-budget feature films Passenger Pigeons (2010) and Pilgrim Song (2012) both premiered at the SXSW Film Festival. With longtime friend Aaron Katz, Stephens co-wrote and co-directed Land Ho! which premiered at the 2014 Sundance Film Festival. The film was acquired by Sony Pictures Classics and won the John Cassavetes Award at the 2015 Film Independent Spirit Awards. (Picture Kyle Kaplan.)

After producing four kids and with nearly 20 years of marriage in the rearview, my parents went splitsville in 1988. At four years old, I was the youngest and could not fully comprehend what was unfolding beyond “Dad’s staying in Uncle Steve’s attic for the time being, you’ll see him on Sundays.” So, my brothers and I spent “the Lord’s Day” with our dad, catching Single-A baseball games across the river and grooving to whatever free nostalgic musical act was popping up at the county fair. Chubby Checker was my first concert, a badge I wear proudly.

At night with the car heat blasting and the moon glowing full in the sky, we’d wind through Appalachian backroads to a gas station where a hand-off between my parents would transpire. I believe he took the longer route to squeeze out another five minutes with us. There were a few cassette tapes he’d repeat, all of them with music from the salad days of his youth: the Platters, Frankie Valli and the Four Seasons, the Everly Brothers, etc. The haunting melodies of reel-to-reel recordings and the rousing anthems of early soul and rock & roll, these soothed his wounded soul and took him back to a time when his future looked bright, with endless possibilities. I latched onto the music as well, hearing the ache and glee, feeling the spirit of pre-Beatles melodies in that cramped car. A Best of Gary U.S. Bonds tape was a favorite of mine. Every song pleading for the party never to end, filled with that unmistakable peak of jubilation. I didn’t want that car ride to end, with the whirring of the car’s heater, that big ol’ celestial moon watching over me and Gary U.S. Bonds singing his heart out to my dad.

When my dad decided to jump back into the dating pool, he adjusted to love in the ’80s like many baby boomers probably did: by recreating some semblance of their youth, a time when dating felt comfortable and familiar to them. Dad (a former jock) met Sandee (a former majorette) and the two cozied up under the Friday night lights of high-school football (he was a principal) and chaperoned homecoming dances. Bewildering the student body with the stroll, the Madison, and possibly even some hand jiving, the twosome felt young, free and unburdened. There were ice cream socials at church, sock hops at school board functions, and late-night coffee confessions – or milkshakes, in Sandee’s case – at fast food joints. An alternate reality Frankie and Annette materialized before my very eyes as Dad and Sandee fell head over heels like a couple of penny loafer-wearing teens. Wedding bells soon chimed.

I was thrust into my father’s courtship at an impressionable age, as I was starting to conceptualize what exactly a romantic relationship was. My oldest brother was a flirt and tom-catted around, and, like most teens, he had zero interest in his kid sister tagging along. But Dad and Sandee had no qualms about bringing me on their dates as they became each other’s steady, and then partnered in marriage. Through stories, music, and artifacts found in Sandee’s home, I pieced together the bygone culture of their youth. The spirit of the era buzzed within my soul, inflaming a passion for the 1950s/1960s teenage experience through a wistful 1980s lens. If I try to understand why, I know one thing that is certain: I connected it with my dad’s newfound happiness.

I soon found myself hungry for movies about 1950s and 1960s teendom. Shag, Hairspray, and Grease were my first obsessions. It wasn’t until I was an adult that I noticed just how popular this subgenre was. In my household, we refer to it as the Eighties-Fifties (Diner, Housekeeping) the Nineties-Sixties (Mermaids, Dogfight) or some kind of cross between. Maybe it was because I wasn’t seeing TV adverts for Gidget and Beach Party, but I dove deep into nostalgia pieces that both sentimentalized and critiqued the past.

When I read the script for To the Stars, written by the bodacious Shannon Bradley-Colleary, I felt as if I had uncovered a lost script from that era of films, when studios made tender and earnest coming-of-age period pieces. It tells the story of Iris Deerborne, a timid and cloistered teen living in rural Oklahoma in 1961. Deemed an “untouchable” by her peers, Iris meets Maggie Richmond, a restless and enigmatic new girl that arrives in town not unlike a Wild West gunslinger, saving Iris from her male tormentors. This brash and exciting city girl with a curious past becomes Iris’ first true friend as together they navigate the murky waters of repression, longing and identity.

Turns out, Shannon had in fact written the script for To the Stars in 1998, and it was even optioned a few times before she eventually shelved it for nearly a decade. For me, it was a match made in heaven. I wanted this project. I desired to create a dreamy, authentic snapshot of the inner lives of teenagers on Oklahoma’s Great Plains. To examine the good and the not so good. I wanted to contribute something to the subgenre I desperately loved, that fueled my childhood pining for another world. The world on which Dad and Sandee drew hearts and flowers, at a moment when they both felt rejected by modern times.

The preparation and creation of early ’60s Oklahoma fed into my oldest adolescent dreams. Production designer Jonathan Guggenheim and I devoured candid photographs as we resuscitated mid-century small-town U.S.A. We took painstaking efforts to highlight a place living 10 years in the past, although there is one anachronistic car in the movie that still haunts me. (Unfortunately, our original vehicle broke down while filming and this was the only one we could summon and still make our day.) Too many movies only pluck the most popular things from the year they take place and there isn’t enough consideration of context. Or worse, they don’t do their research. That kind of laziness could be overlooked when I was a kid, but as an adult, I’m pulled out of the movie when anachronisms pop up.

As we rolled into production, I was able to see in the flesh a damn good recreation of a world that had previously been limited to pictures and screens. Wiping away the aesthetic gunk of the present as we moved from location to location felt like some kind of glorious exorcism – that is, until we had to put things back.

After attending a festival screening, I asked Dad and Sandee if they thought the movie captured the spirit of the era. They replied with an enthusiastic yes and then took me on a trip down memory lane. I still love to hear their stories. Sometimes I like to picture teenaged Dad and Sandee as students at Wakita High, the school attended by the characters in To the Stars. Would they have found each other in those halls? A budding romance and a promise ring on her finger? Would the 1980s have been different for them if they had not been mending broken hearts? I guess I’ll never know, but I do know I’m grateful to be here to ruminate on it.

Martha Stephens’ latest feature, To the Stars, a ‘60s-set coming-of-age drama starring Kara Hayward, Liana Liberato, Jordana Spiro, Shea Whigham, Malin Akerman and Tony Hale, premiered at the 2019 Sundance Film Festival in the U.S. Dramatic Competition and is available on VOD. Stephens is a graduate of the University of North Carolina School of the Arts directing program. Her micro-budget feature films Passenger Pigeons (2010) and Pilgrim Song (2012) both premiered at the SXSW Film Festival. With longtime friend Aaron Katz, Stephens co-wrote and co-directed Land Ho! which premiered at the 2014 Sundance Film Festival. The film was acquired by Sony Pictures Classics and won the John Cassavetes Award at the 2015 Film Independent Spirit Awards. (Picture Kyle Kaplan.)

coming of age
dating
Directing
film essay
Martha Stephens
nostalgia
To the Stars
The Way We Get By: Nick Brown of Cable Ties is Making Passata With His Roommates
Hear First: Deau Eyes’ Let It Leave 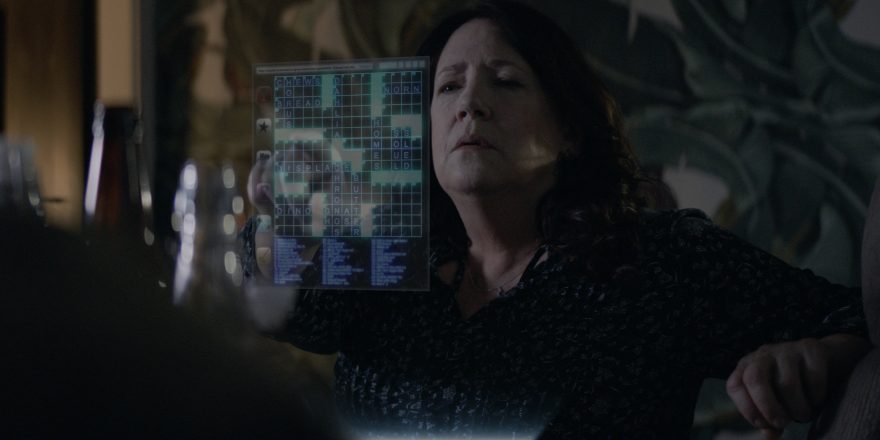