Is there a container big enough to hold grief, in all its vastness? Maya Bon, the artist behind Babehoven, built the Nastavi, Calliope EP after a cascade of losses, a vessel into which she poured two years of heartache, humor, and rage, then the growth that bookended these cataclysms. Evocative of Arthur Russell’s Love is Overtaking Me or Julia Jacklin’s Crushing, it balances meticulously between the universality of emotion and the particulars that crack you open — barefoot eating Thai food alone in a morning kitchen, or the memory of Calliope, a beloved family dog and the EP’s namesake. There is no containing grief, but Nastavi, Calliope lets us gaze into a fragment of it like a broken mirror — a sharp, incisive revelation.

Quarantine has been a wild ride! Having recorded two EPs during this time while Ryan and I were living in Vermont, I felt it would be gratifying to create a visual and written journal representing the people, places, and things that have given us life throughout it all. Tapping into quarantine creativity was challenging at first, but over time, it became a channel through which Ryan and I found ourselves thriving and growing in all sorts of new directions. These photos are intended to solidify some memories of ways I have felt safe, seen, and inspired during this trying time. 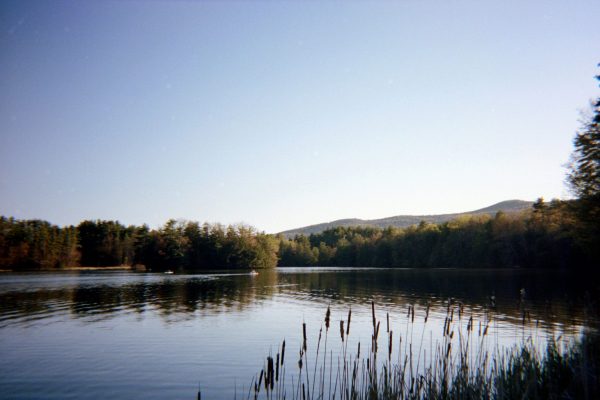 This is a photo of Lake Shaftsbury, a body of water near our apartment. There’s a trail that follows the edge of the lake that I often hike around when I want to get out of the house. Especially before I began working at a bookstore nearby, I found myself feeling a bit stir crazy, needing to go for many walks to clear my head in the near complete isolation that Ryan and I had sought out for ourselves after leaving Philadelphia at the onset of quarantine. Witnessing the lake change through the seasons brought a whole new sense of awareness of time to my life. Getting to see it freeze over to the point that people could drive cars onto it, fishing in big groups with fires burning on the ice, I felt enamored with its strength. I found myself drawing on that strength in winter; There’s something humbling about witnessing water turn to ice. 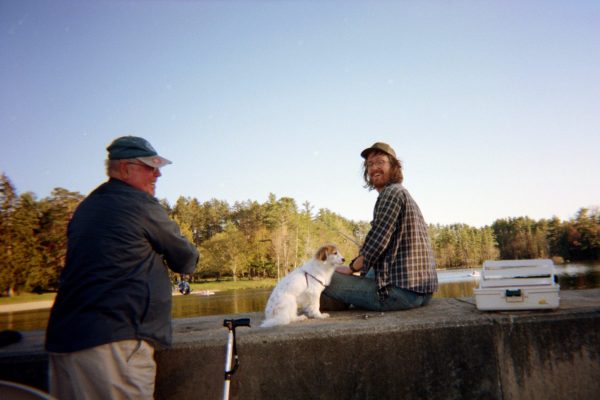 Ryan and I have spent a great deal of time with his grandfather, Pepe, during quarantine, who lives very near us. This photo is of him and Ryan (and Woody) fishing at the lake. Pepe and Ryan love to fish and Woody loves to chill. You can see some kayaks in the background — this was in early spring when the longer and warmer days feel like gifts that make you all scrambled up just trying to soak in every second. Pepe has provided some much needed social interaction for Ryan and I during quarantine. It was pretty scary up until he got the vaccine, because he’s obviously elderly and we didn’t want to chance getting him sick, so we’d keep our distance and stay masked. But seeing him always lights up our days and makes us feel more connected. 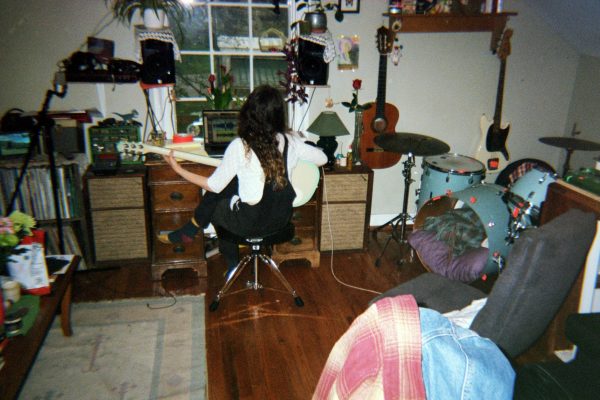 Here’s a photo of me tracking guitar in our apartment. This is where we recorded Nastavi, Calliope and our EP that will come out in the fall. This living room has been a chrysalis for us, granting us the cozy space to explore all sorts of new directions in our shared solitude. It is just big enough for us to have our drums set up in the corner and still be able to move around freely. Because we didn’t have any neighbors in the building for much of quarantine, we were able to make music at any hour. The Fayville River runs right outside our window, which is both a dream and also a bit of a challenge sometimes —the river is a constant source of white noise and can be heard faintly in most of our recordings. Thankfully, it’s not loud enough that you’d necessarily be able to pick the frequencies out and say, Hmm, that’s a river, but it is present and was something we had to be mindful of while recording. 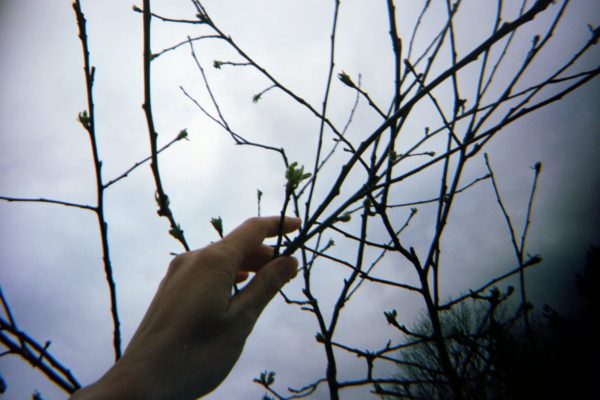 Buds started to form on the barren trees in April. I felt so excited to see them. They seemed impossibly delicate in the still cold days and nights that followed. I found myself feeling drawn to those first buds, wanting to see them up close, to let them know that I appreciated them. Now the weather has turned warmer and the buds have turned to flowers with baby leaves that followed. Having grown up in LA and having only now experienced two East Coast winters, I am still marveling at the ways that the world changes around you. It brings up lots of different emotions that inspire new creative practices for me. For instance, I’ve noticed that winter is actually quite a productive writing and recording time for me and Ryan. As spring rolled around, I was surprised to feel a bit of dread arise; I realized that as the days became warmer and longer, I was worried about spending less time working on music because I’d be outdoors more. 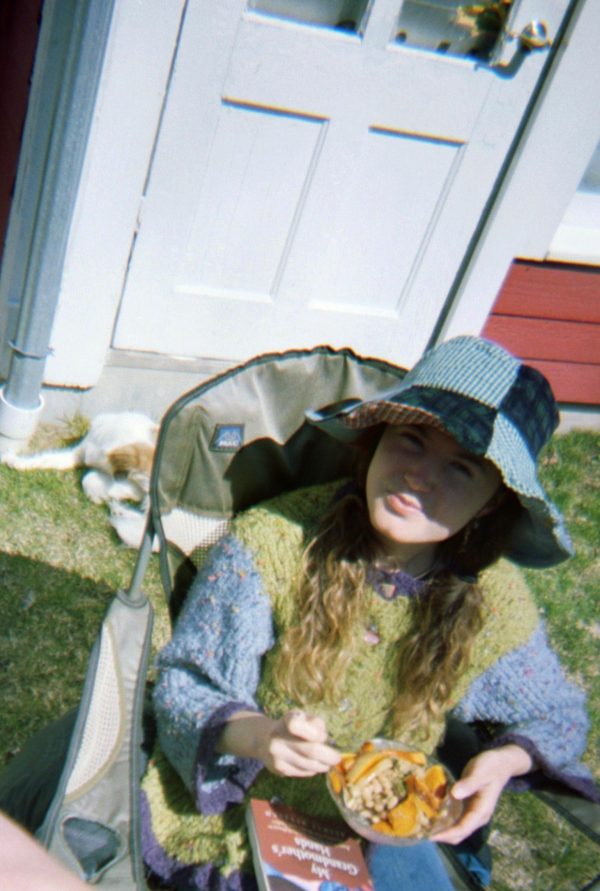 Here I am snacking on some squash, kale, and beans sitting outside next to the river in front of our apartment with Woody curled up behind me. I was taking a moment to reread some of my favorite passages from My Grandmother’s Hands, a book that I love dearly. This river spot has helped me clear my head and find inspiration during quarantine. I’ve found that when I’m feeling overwhelmed, listening to the roaring sounds of the water, the constant movement, the air moving off of it all seem to bring clarity to me when I need it most. 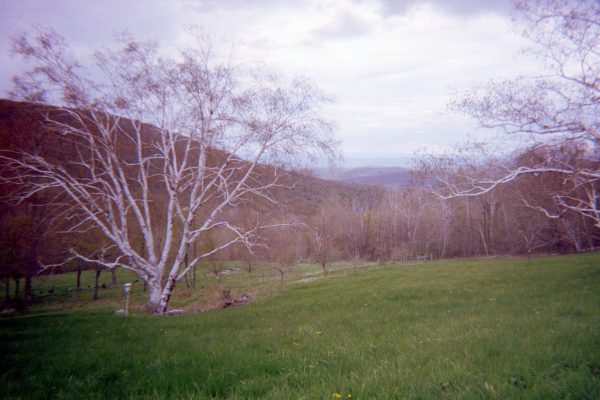 This spot in Merck Forest has been a refuge for me. I came here to sit one day late last summer and wrote down lots of songs I’d been percolating over the previous six months. I often write this way — I’ll have many song ideas recorded onto my phone as voice memos and then I’ll choose a day to find some space and write them down. Sometimes I’ll wait years to actually write songs down that I’d recorded as voice memo ideas. It’s hard to tell in this photo, but the view from this spot is stunning — you can see mountain range upon mountain range for miles. As I sat here amongst the grass and flowers and trees, writing down songs that came to be recorded in Nastavi, Calliope, I felt a certainty surrounding my creative process: This is healing work, this is important work, and this is work that is meant to be shared. 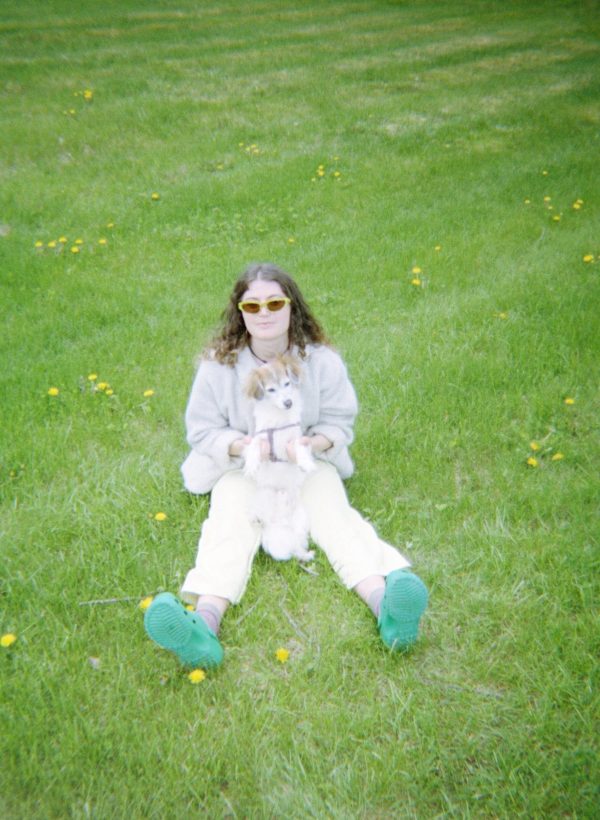 Here I am posing with my dog Woody. He is one of my best friends. Woody used to be our band manager but he never did any work and didn’t really like our music. We fired him eventually once we met our current manager, who is doing a much better job. Now that our relationship is strictly familial and no longer business-driven, Woody is leading a more fulfilling life and we have less interpersonal issues overall. 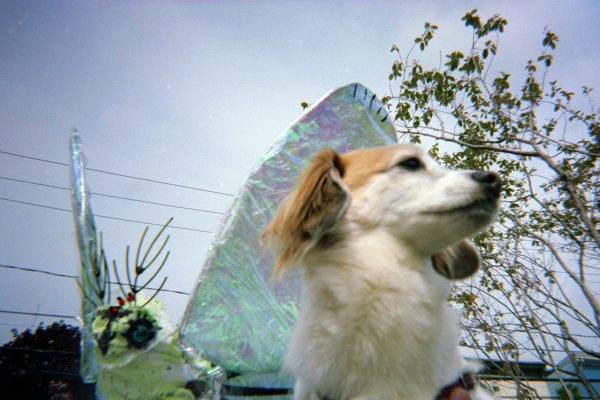 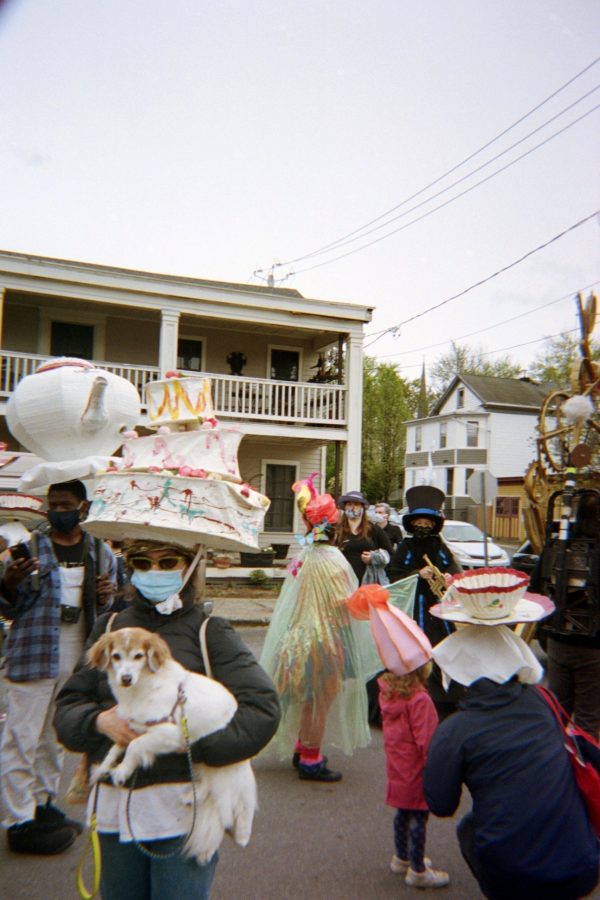 Here are some photos of Woody and I posing at the Mad Hatter parade in Hudson, NY. This parade was so special! It brought me lots of joy and upheld my desire to be surrounded by creative angels! 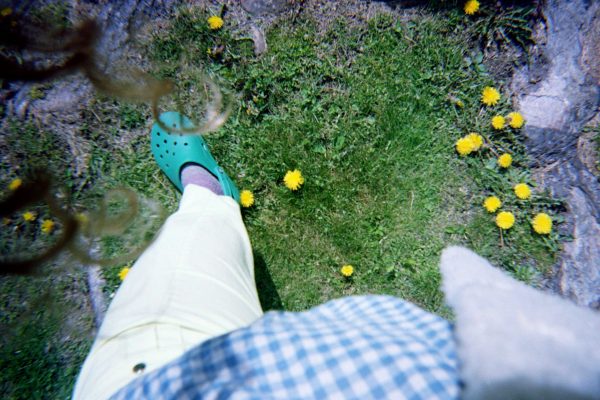 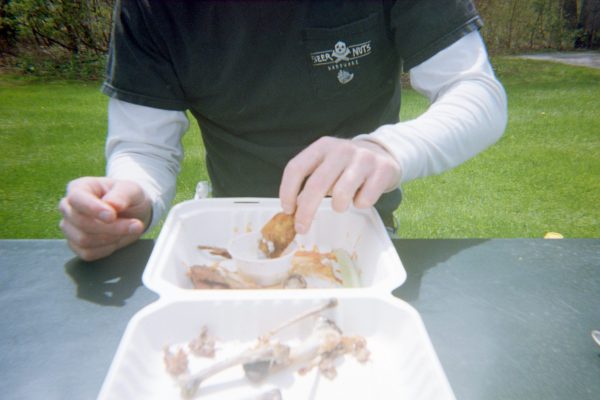 Once I started working at the bookstore, Ryan would come and meet me for lunch some days, which filled my heart. Here he is eating chicken wings from his parent’s restaurant that is right down the road from the bookstore. We’d sit and chat about the recording work he had been doing that day and I’d hear about any new ideas or thoughts that had popped up since I’d been at work. It was always exciting coming home at the end of the day to hear what had become of our songs. 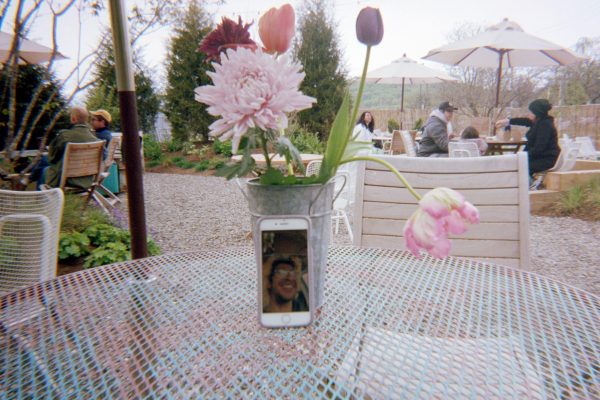 And lastly, but in some ways most importantly, friends on FaceTime have gotten me through this isolating time. Before working at the bookstore, I knew next to no one here in Vermont. I was on FaceTime constantly with my friends (one of whom is pictured here), which made me feel connected and rejuvenated. We played lots of games together and went about our days as if we were together IRL. I even had a Zoom birthday party where everyone dressed in costumes that will actually go down as one of my favorite birthday parties I’ve had; one of the amazing parts of it was that I could invite friends from all over the world who often don’t get the chance to meet or spend time together. If it weren’t for FaceTime and Zoom and phone calls, this quarantine would have been very challenging. I am immensely grateful for the support and love I feel from the friends in my life and feel that they are some of the biggest reasons that I was able to move through this time emergent and inspired.

Is there a container big enough to hold grief, in all its vastness? Maya Bon, the artist behind Babehoven, built the Nastavi, Calliope EP after a cascade of losses, a vessel into which she poured two years of heartache, humor, and rage, then the growth that bookended these cataclysms. Evocative of Arthur Russell’s Love is Overtaking Me or Julia Jacklin’s Crushing, it balances meticulously between the universality of emotion and the particulars that crack you open — barefoot eating Thai food alone in a morning kitchen, or the memory of Calliope, a beloved family dog and the EP’s namesake. There is no containing grief, but Nastavi, Calliope lets us gaze into a fragment of it like a broken mirror — a sharp, incisive revelation. 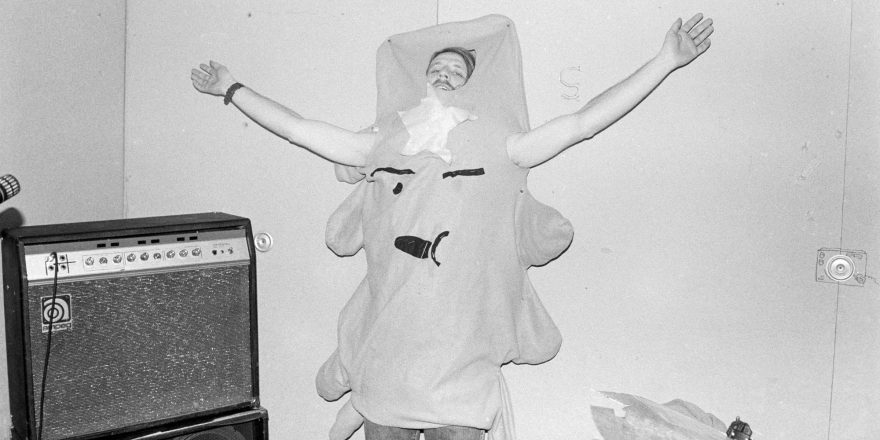 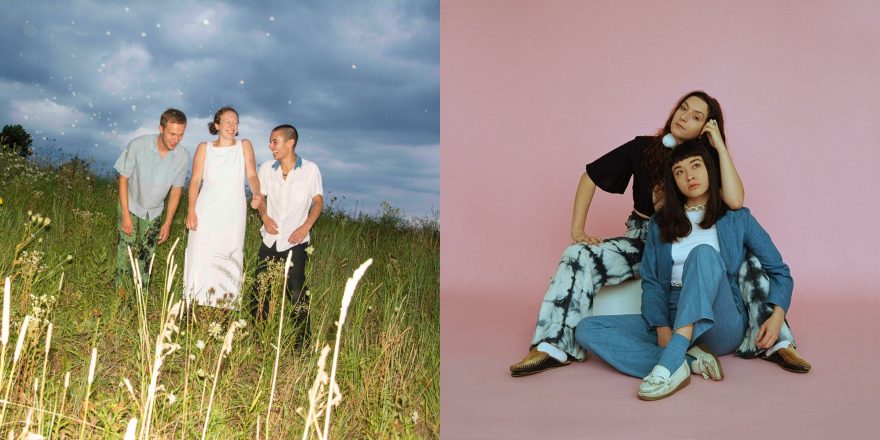 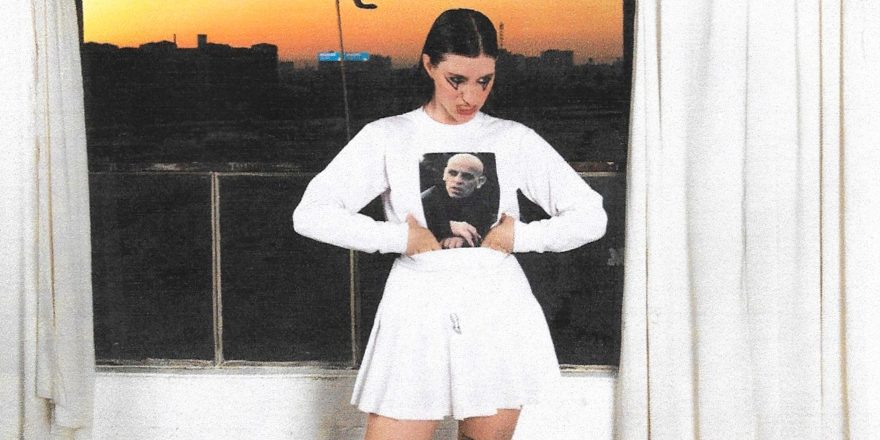