Two-time OBIE winner Dennis Boutsikaris appeared on Broadway as Mozart in Amadeus.  His films Include The Bourne Legacy, W., *batteries not included, Dream Team and the recently released Money Monster.  He can presently be seen as Rick Schweikert taking on Jimmy McGill in AMC’s Better Call Saul.

Rewind eight months. I am at an unnamed expensive restaurant meeting with an unnamed producer who’s in full-throttle wooing mode, intoning to a nervous me, “We don’t want an imitation, we want a suggestion.” We are discussing my possible participation in a two-night biopic spectacular, Love and Betrayal: The Mia Farrow Story, for the newish Fox network that contained all the sordid details of the relationship, break-up, Soon-Yi-ness and headline-grabbing unpleasantness between Ms. Farrow and Mr. Allen. “Only a suggestion …” I already had strong misgivings about the morality of swimming around in Mr. Allen’s mess of a personal life. It is astonishing to consider that even then it didn’t seem quite as sordid, as wrong, as despicable and ugly as it does now. The separation of artist and man, the forgiving of one for the good works of the other, is confounding and mitigated, or rather, rationalized, rightly or wrongly, by the strength of the art on one hand and the weight of the crimes on the other. Roman Polanski? Elia Kazan? It’s a fucking rathole. Watch Manhattan and marvel at the glorious opening montage that has forever linked Gershwin’s music and the triumphs of the Island’s breathtaking architecture … and then, some two hours hence, marvel again at how sweet and adorable pedophilia can be. Hand sanitizer, anyone?

But none of this seemed to matter in the decision-making moment. The script of the mini-series was one or two steps above a lurid tabloid, filled with imagined conversations that were sometimes well-written and sometimes not so well-written, and buffeted by transcripts of trial scenes that were challenging and compelling. The whole enterprise contained many of the pitfalls of the biopics of the era: every scene placing you in the dramatic timeline (“I can’t now, I have to finish editing Hannah and Her Sisters”) and peppered with dialogue that simply served to remind the audience of how much research had gone into the proceedings. David Mamet says if the first thing you see on screen are the words “Based on True Events,” you should run. And there was the obligatory celebrity parade: Look, isn’t that Andre Previn? Oh, there’s Frank Sinatra. Oops, you missed Soon-Yi! Oh wait, sorry, you didn’t.

I was conflicted, and relentlessly tried the patience of everyone whose advice I sought. Should I risk making a fool of myself? Was this a career-ender? It would certainly end any chance (slight, if there ever was one) of working with The Man. But if I was selling myself to Satan – which, let’s face it, I was – then cash was king. When it comes to a fat payday, agents will cannily encourage a “yes” with the sage-like salve, “If it’s terrible, nobody will see it and you’ll be fine. … So shall we pull the trigger?” And truthfully, stupidly, inanely, my mind was eased somewhat by the phrase “a suggestion…” Impersonations of Woody Allen had been done to death (Rick Moranis, Kevin Pollak, everyone you’ve ever met, etc.), and besides, I couldn’t do one. I have never been one of those actors that could do imitations at the drop of a hat. A reviewer once said of my performance Off-Broadway as a famous Spanish painter that my accent seemed to travel speedily around Europe before landing breathless and tired in some remote Danish territory. So an imitation was impossible, but a “suggestion” was doable and would keep me from trying to be a male Streep. A “suggestion” was also, apparently, a big fat lie.

The next week I found myself at the L.A. studios of 20th Century Fox in a cramped office jam-packed with executives. I was reading a bedroom scene opposite a male casting director playing Soon-Yi while I was doing a slight “suggestion” of The Man that included literally pulling down my pants. How much lower could I stoop? I was hired on the spot.

I arrived in Toronto for a week of pre-production, and was immediately whisked to a special effects house to have a plaster form made of my real nose so the fake nose – the iconic Woody nose – could be built on top of it. Or more specifically, 60 of them, one for each shooting day. I still have a box of extras (see above). Then they cut my hair, dyed it reddish and shaved a bald spot that would make St. Benedict envious. It was dawning on me that this was getting less like a “suggestion” and increasingly like opening night at Madame Tussaud’s. It was beyond comprehension how I ever thought I could get away with simply wearing a fatigue jacket and glasses and somehow skip blithely through this enterprise speaking standard English in a Jersey twang. Principal photography was set to begin in three days and I was starting to panic.

I somewhat sheepishly begged the production office for someone to help with the accent and “as many films as you can give me.” Thankfully, a wonderful Canadian dialogue coach arrived with pages and pages filled with accented words and terms like “schwa” and “diphthong” that meant literally nothing to me. While struggling with tongue placement and dropped R’s, we watched Annie Hall, Crimes and Misdemeanors, and all those other wonderful films. But I kept thinking this was not the real Mr. A. This was not real life. This was him “acting,” sometimes “over-acting,” and sometimes funny, yes, but not even close to the bones of the truly neurotic, the truly dour, the truly, deeply unhappy person. Just the persona.

So, with even less time, we asked for as much real footage as could be found. News clips and uncomfortable primetime interviews intended to put a P.R. spin on his behavior arrived in various VHS boxes, and they were a revelation. Here he was: fidgety, defensive, filled with nerves and ticks and irritation and very little humor. And that odd, odd cough. The idea struck us to keep a list of of his obvious and not so obvious gestures: the aforementioned clearing of the throat, the holding one finger along side of the face in a moment of “truth-telling,” the side of the mouth clicking sound to announce an “oh, well” or “waddya gonna do,” etc.

The plan was to choose two or three traits that seemed appropriate for each scene. Just throw some “quirks” against the wall and hope they stick. But this was so antithetical to everything I (thought I) believed. There are actors who work from the inside out who find the deep organic reasons and motivations for every line, always asking, “What does my character want?” There are other actors, great actors, who work from the outside in. Olivier famously would spend hours finding just the right halting gait or makeup or, yes, nose, so all the rest could flow. But our clinical list-making was neither of those … ours was the stuff of shop class. We were working from the outside out. It was the opposite of organic to a degree that would have made Monsanto proud. But I had nothing else.

The first day of shooting, hours were spent with hordes huddled around my face — did the nose look real? (No.) Was it properly blended to the rest of my face? (No.) Did the glue sting? (Yes!) All the while, the dialogue coach was sitting in the next chair performing a call-and-response of the Brooklyn accent whose mantle is now carried by B. Sanders.

The first set-up on this first day took place at a pond that was a stand-in for Mia’s house in the country. My wardrobe consisted of an apiary-appropriate bee helmet, so the Nose was veiled and I felt hidden … and as we stood around waiting for track to be laid, my coach and I went over our list of gestures and picked out a few. And as we did this, he said, “Woody wouldn’t go into that pond … there’s eels in thairrr.” I laughed and stole it, bravely throwing it in mid-first take proclaiming, “I’m not going in there … there’s eels!” It got laughs from the crew, but it did something else. The ice cracked and it was my first baby step in gaining the courage to continue. I threw in a cough and Gesture #6 (that frenetic swinging of the arms when making a point). It felt false and mannered, but so what? It worked.

As the weeks went by, we started looking for other words I could throw in that had the sound of something Mr. Allen would say: compost, Squanto, Buick … and with hours and hours of repetition and of the director giving me more and more freedom, the “suggestion” (and, honestly, the panic) receded into the distance as I was able to slide into his skin in a less superficial way. Amazing how a few words and gestures saved the day.

On re-watching the film 22 years later, one or two of the scenes make me feel like, yes, against all odds, I actually pulled off something between a “suggestion” and a human being. Other moments, I want to crawl under the DVR and wait for the all-clear siren. Such is the effect of looking at myself from the other end of the telescope: all I can see is what I would do different.

I’ve since had the opportunity to play other real-life people, most notably Paul Wolfowitz in W.; in that film, the “suggestion” was handled deftly by Oliver Stone insisting the make-up department give me more and more ear hair. Easy. But for the rest, my advice for any actor playing a non-fictional person –  say, someone lucky enough to be cast in the forthcoming HBO 15-part series Pence! The Trump Years – remember the Harold Hill Think System: If you think you can play _____, you can.

Two-time OBIE winner Dennis Boutsikaris appeared on Broadway as Mozart in Amadeus.  His films Include The Bourne Legacy, W., *batteries not included, Dream Team and the recently released Money Monster.  He can presently be seen as Rick Schweikert taking on Jimmy McGill in AMC’s Better Call Saul. 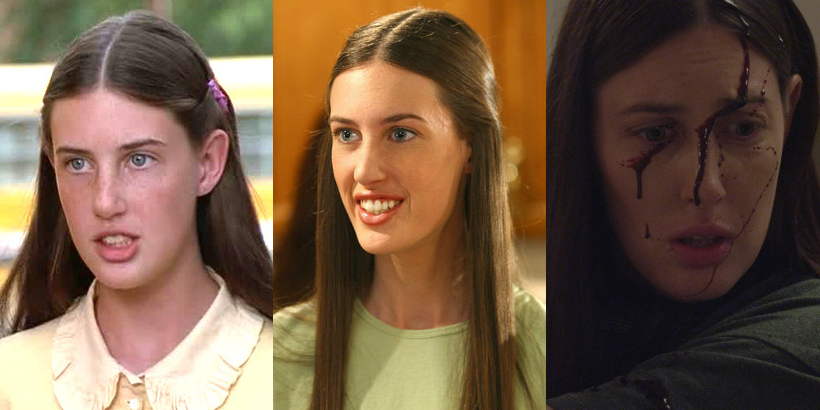 The Time Brad Pitt Burst into My Dressing Room, and Other Stories