Doug Brod is the former editor in chief of SPIN magazine and was a long-time editor at Entertainment Weekly. He has worked for Atlantic Records, taught at New York University, and was a segment producer of the comedy/music television series Oddville, MTV. Brod has also written for the New York Times, Billboard, Classic Rock, The Hollywood Reporter, and The Trouser Press Record Guide. A native New Yorker, he lives with his family in Toronto.

Sean Delaney was a crucial figure during KISS’s early days. As the lover of their manager, Bill Aucoin, he helped with the band’s choreography, costuming, and stage show. After working with such subsequent Aucoin signees as Starz, Piper, and Toby Beau, Delaney decided to focus on his own music, releasing a solo LP called Highway (a bizarre mix of Meat Loaf-ish pomp and melodramatic soft rock) on Casablanca in 1979. After it failed to click, he recruited a team of ringers — including bassist Pieter Sweval (formerly of Starz), guitarist David Andez (a Village People associate with a freakish vocal range), guitarist Richard Martin-Ross, and drummers Craig Krampf and Richie Fontana (both of whom had played on the 1978 solo album by KISS’s Paul Stanley) — to form the groundbreaking half-gay/half-straight Skatt Bros., who recorded their debut LP with Toronto-based disco producers Willi Morrison and Ian Guenther.

Strange Spirits by the Skatt Bros. was released with little ballyhoo in November 1979. It’s hard not to see and hear it as not only a celebration of the lifestyle that Delaney, Sweval, and Andez fully embraced, but also as a calculated attempt at a sleazier, more extreme Village People, who at the time were one of Casablanca’s best-selling acts. First, there’s the band name, which suggests an unholy fellowship bound by both improvisational jazz singing and a sexual preoccupation with poop. Then there’s the cover: six dudes — four with bushy mustaches, some holding cigarettes, clad in muscle tees and leather — posing in a bar as backlit smoke billows out from behind them. Then there are the messages etched into the run-out grooves: music for miss thing (side 1) and i love paul (side 2).

The album opens with “Dancin’ for the Man,” written by Delaney and sung by Martin-Ross in a remarkable soul-man growl. Punctuated by anachronistic wah-ooohs, it’s like a discofied update of the early-’60s chestnut “Mashed Potato Time.” “Fear of Flying,” written by Morrison, is a sticky hunk of dense bubbleglam that surprisingly squanders the opportunity to promote the zipless fucks of Erica Jong’s namesake 1973 feminist novel, an omission that is swiftly redressed when Sweval takes the mic for the next song. A soaring, overripe SoCal country ballad, cowritten by Delaney, “Midnight Companion” begins with a trucker cruising for an anonymous encounter at a rest stop just north of the Valley and ends with him begging for a hitchhiker, biker—someone, anyone — who wants to play.

After this unexpectedly moving orchestral schmaltz comes the album’s centerpiece, the sinister and sublime rough-trade anthem “Walk the Night,” which may be the most pungent fusion of hard rock and disco ever recorded. Over a thumping foundation that combines an ominous bassline, handclaps, ribbits, a villain’s chuckle, and a victim’s scream, a spaghetti western guitar riff conjures up the stink of illicit sex mixed with the smoke of a thousand unfiltered Marlboros and fetid lakes of spilled Budweisers. The song’s highlight: Andez’s absurdly deep-voiced rap interlude, during which he warns, “He’s got a rod beneath his coat he’s gonna ram right down your throat!” Released a full year before Blondie’s “Rapture” brought rap into the rock mainstream, the track had its origins in “Creeper,” a song by one of Andez’s earlier groups, the short-lived funk-rock Manhole.

“Old Enough,” Strange Spirits’ most unabashed shot of pure porno-disco, tells the tawdry story of a runaway named Sally, caged at the tender age of twelve, who was last seen showing pink in a skin magazine. In “Life at the Outpost,” a sergeant at arms with masculine charms teases the ladies when he’s not using his black leather boots to kick the butts of recruits. When the gang vocals of the chorus urge the listener to “Give your love to a cowboy man / He’s gonna love you hard as he can,” the promise (or threat) of rough sex is palpable. It’s the aural equivalent of a Tom of Finland poster, though, according to Sweval, some of the group’s inspiration came from more genteel places. “There’s a lot of influence from people like the Andrews Sisters and the Mills Brothers,” he said at the time, “in the way we stack our harmonies.”

The album stayed pretty much under the radar in the Casablanca offices, not least because the sheer tonnage of product made it impossible for every record to get the TLC it deserved. The label’s hands-off approach apparently extended to the cover art. Dean Tokuno was a young photographer, specializing in celebrity and fashion, when he got the gig to shoot the band at Griff’s, one of Delaney and Sweval’s favorite Hollywood leather bars. “I remember the creative team at Casablanca being very weak, and I’m going to have to assume that it had something to do with their lack of commitment to the band,” Tokuno says. He had done a lot of work with A&M Records at that time, for which he was thoroughly briefed. With the Skatt Bros., he remembers being surprised at how little information was on offer.

Upon its release, the record garnered little press, and the reviews it managed to get were mixed at best. One gay magazine, The Advocate, wrote at the time, “For those of our kind who do spend late night hours in sleazy bars, cruisin’ and cavortin’, they hit a few responsive chords… It is altogether relentlessly masculine.” Another, In Touch for Men, described them as “a gale-force rock band with a strong leaning toward both danceability and romance in their music.” Calling the album “a strong debut for several tastes,” Record World went with this generic boilerplate: “The rock is just hard enough for AOR, while a number of tunes have Top 40 perfect hooks.” The Santa Cruz Sentinel, on the other hand, led off its capsule appraisal with the words “Here comes some more bad wave…”

Jim Farber was a young New York City-based music critic in the ’70s when he wrote about the burgeoning rock-disco scene for the gay-leaning entertainment magazine After Dark. Although he loved camp, he was deeply suspicious of the Skatt Bros. “I mainly remember the album cover because I thought it was so unbelievably ridiculous,” he says. “It seemed like such a niche thing they were trying to market: gay rock-disco. Casablanca had some great stuff, but there was always that whiff of exploitation.” The group, particularly the unpleasant connotation of their name, also managed to turn off Paul Stanley, who saw his former collaborators embark on a project that he views as a sort of unsuccessful precursor to Frankie Goes to Hollywood. “It was uncomfortable,” he says. “It was too edgy and dark and represented something that most people couldn’t relate to.”

Farber recalls hearing deejays spin “Walk the Night” at Manhattan leather bars like the Spike. “It was meant to be the soundtrack to people fucking in the trucks,” he says, referring to the often-anonymous public sex that would occur in empty, unlocked vehicles parked off the West Side Highway. As if to remove all doubt, in a 1997 study of “music of the baths” (i.e., “music programmed to enhance S/M or fistfucking”), cultural anthropologist Gayle Rubin cited “Walk the Night” as “a particular anthem of late ’70s gay male S/M” that was popular at the Catacombs, a fisting club in San Francisco. And in an unofficial YouTube video, the song plays over footage from the scandalous thriller Cruising, in which Al Pacino, as an undercover detective, dances sweatily in a dank basement club while huffing a bandana presumably soaked in poppers, the sex stimulant amyl nitrate, as severe shenanigans go on all around him.

On a January 1980 episode of Dinah Shore’s talk show, the Skatt Bros. performed “Dancin’ for the Man” and “Midnight Companion,” likely the first and only time a song about furtive trucker sex has aired on daytime TV. As Shore signed off, the band presented the host, a genuine America’s sweetheart, with a black satin jacket adorned with their incongruously cartoonish logo — reminiscent of KISS’s. Above it was the album’s title, drafted in letters that resembled dripping ejaculate.

“Walk the Night” ended up spending eleven weeks on Billboard’s Disco Top 100 chart, peaking at No. 9 in April 1980 and becoming the group’s only U.S. hit. The song has since experienced an extraordinary afterlife: dance remixes by the likes of superstar deejay Frankie Knuckles, an appearance in the video game Grand Theft Auto IV, a 2012 gender-switched cover by Peaches and the Phenomenal Handclap Band for a Casablanca tribute album. Jake Shears, of nu-disco extroverts Scissors Sisters, has said that hearing “Walk the Night” at a “disgusting” German sex party inspired the sound of his group’s 2010 album, Night Work. One of that record’s highlights, “Harder You Get,” drops so many blatant sonic references to the Skatt Bros. classic, it’s nothing short of a tribute. Hard rockers Queens of the Stone Age and alt-dance act LCD Soundsystem used the song as walk-on music during their respective 2017 world tours. And it played over the end credits of a 2019 episode of the HBO comedy series The Righteous Gemstones.

Though the Skatt Bros. never did a full-blown tour of the States — gigging sporadically at the Starwood and Hong Kong Café in L.A., and at venues in Portland, New York, and Boston — they are surely the only band to have opened for both Gamma (featuring Ronnie Montrose) and Natalie Cole.

A few months after the album sessions, Casablanca sent the group to the Record Plant in L.A. to cut a clamorous cover of Elvis Presley and Otis Blackwell’s “Don’t Be Cruel.” Sung by Richard Martin-Ross, the single “was a powerful track, a fucking rock-and-roll song,” Fontana says. It was also a move, he believes, that further confounded the audience’s perception of the band. “David’s playing lead guitar like Hendrix,” he says. “People would think, ‘Are they gay? Are they not?’”

Doug Brod is the former editor in chief of SPIN magazine and was a long-time editor at Entertainment Weekly. He has worked for Atlantic Records, taught at New York University, and was a segment producer of the comedy/music television series Oddville, MTV. Brod has also written for the New York Times, Billboard, Classic Rock, The Hollywood Reporter, and The Trouser Press Record Guide. A native New Yorker, he lives with his family in Toronto. 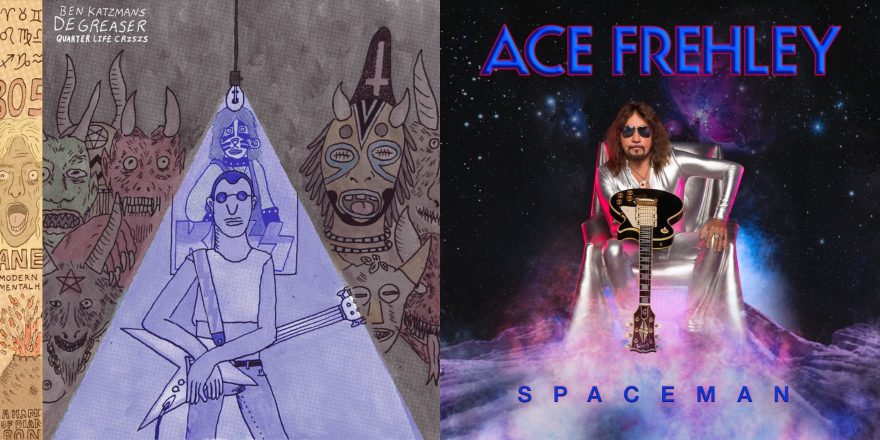 An Anthem for Every Shredder: on Tour Life and Ace Frehley’s Spaceman 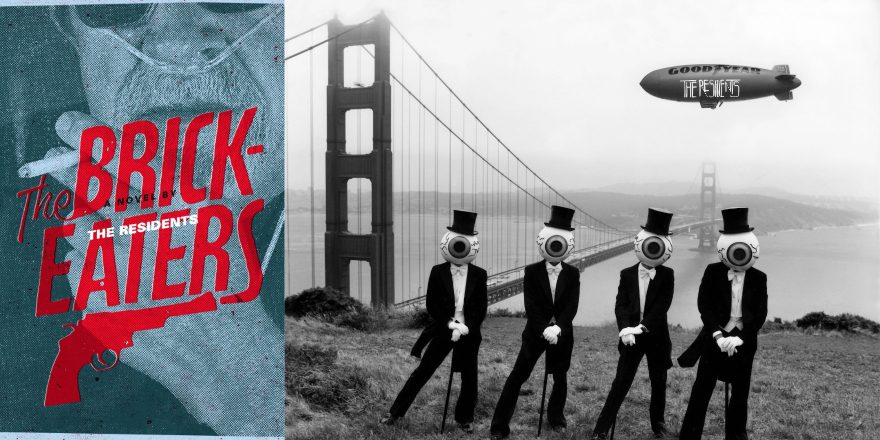 An Excerpt from The Brickeaters, a Novel by the Residents