Palma Violets want you to know that they don’t care. In a recent issue of the NME, singer-bassist Alexander “Chilli” Jesson declares that the band have “tried to consciously not be political.” The so-called breakout band and their swaggering attitudes, big ’70s collars and don’t-care-greasy-hair feel like they’ve “got a lot more to write about” on the follow-up album to their highly hyped 2013 debut 180. Jesson goes on to lament: “everything is so fucking politically correct now.”

It’s true: landfill indie bands in the UK are having a tough time right now. Leading the way on sociopolitical and cultural apathy are gangs of white, cisgender men wielding guitars and desperately clinging to relevance that we all sighed with relief to see dissipate from the shallow, narcissistic indie scene of the early 2000s. Palma Violets’ press campaign for their new album Danger in the Club, much like the band’s musical content, is derivative, tired and redolent of an era in British music when hedonism reigned supreme. So what’s a white guy to do when the political tides are turning against him? Palma Violets seem to think the answer is to write an album entirely devoid of any musical or personal thought whatsoever. The dichotomy, of course, is that this don’t-try attitude is so forced that you’re left with the sour taste of secondhand embarrassment after every smugly underworked track on Danger in the Club. Ultimately the culmination of willful sonic and political apathy creates a second album that might as well not exist.

Palma Violets take a particular pride in appearing carefree to the point of being careless. But when bad, lazy songwriting is combined with bad, lazy musicianship, the result is nothing to celebrate. They boast in an interview with DIY Magazine that “there’s no producer in this world who could make us sound professional,” but with John Leckie (Oasis, Radiohead, the Fall and the Stone Roses, to name a few) at the production helm you would think they might have at least cared enough to practice their songs at some point. Alongside the overwhelming void of artistic intent that Palma Violets have set the public up to expect from this album, it is consistently sonically confused.

Danger in the Club begins with “Sweet Violets,” an a cappella snippet (whose origins can be traced back to a 19th-century U.S. showtune) sung in mockney accents. This laddish pub chant segues into “Hollywood (I Got It),” a song whose references are so many and so often employed it’s hard to tell whether it wants to be blues, surf-rock, vintage UK punk, or maybe just Fat White Family. This combined three and a half minutes of an album opening is surely intended to excite, and I can see how it may on first listen. But on closer inspection what appears to be a joyously messy crescendo is in fact a vapid and rushed attempt at creating a sound which merely mimics a recklessness both musical and personal that has already been done so much better by the Libertines, for instance.

Worryingly, these first brief minutes are just about the peak of excitement on this album. Danger in the Club runs for 40 minutes, which, given its genre, is generous, even excessive. The shining example of time-wasting on the album comes in the form of “Peter and the Gun,” a five-minute-long pseudo-opus that I can’t help feel they must have thought was their “A Day in the Life.” Mostly made up of a lethargic football chant that gives the song its name, the song is a lesson in trying too hard to be atmospheric, and subsidises complex songwriting with skittish, random construction. In this sense, “Peter and the Gun” perfectly encapsulates Danger in the Club: parts are squished together seemingly for no reason other than to fill in gaps, lyrics are eschewed for wailing when the inspiration runs out, the melodies are immediately forgettable, tempo and key changes are thrown in to create an illusion of multifaceted writing and, as with every other song on the album, the best parts are the ones in which you think you’re listening to something else. (The needlessly injected ahhs serve only to remind me that Blur probably aren’t that bad a band, while the group vocals that feature heavily on this song and most of the album just make me want to listen to the aforementioned Libertines again.)

Pace is an issue throughout the album; “Coming over to My Place” and “Secrets of America” exemplify the sheer lack of, and need for, choruses that would make the album much more fun to listen to. Both songs are particularly oafish and poorly conceived; the former ends on an arbitrary, faux-emotive string section and clunky guitar solo, while the latter is essentially the musical equivalent of a three-minute punch in the face from a bunch of boys who’ve been served at the pub for the very first time.

Palma Violets revere British rock & roll, most obviously so in “The Jacket Song.” Smack in the middle of the album, it functions less as a climax or a rousing pace picker-upper than as a self-serving ballad that attempts to capture the simple brilliance of the Kinks’ pastoral acoustic rock without any of their melodic hooks or lyrical brilliance: the line about a “dress… that is quilted across the breast/I love that dress” seems particularly ill-thought out. The influence of classic British artists is littered across Danger in the Club: not just the Kinks, but the Clash and the Beatles, even Gang of Four and the Smiths. But when songs become so referential that they turn into cheap knock-offs, the art of citation becomes something to admire. At this point all guitar music is derivative, by and large. But there is a difference between your influences being the only interesting part of your songs and transforming those influences into meaningful additions to originality. Strangely, when the classics fail to give these guys something to work with, they seem revert to more contemporary bands for inspiration (maybe just so they can assure themselves some relevance). The album’s title track and first single hints at Fat White Family while “Matador” starts like an old Arctic Monkeys tune.

But as I grappled with every song on Danger in the Club, all roads led back to the one British indie-rock band that did pissed-up slacker best: the Libertines. The thing is, we don’t need another Libertines; we don’t need worse versions of music that was itself already a version of something. The word “shambolic” will be used to describe this album over and over again, and so it should, but not to a celebratory effect. Palma Violets have attempted to recreate the raucous sound and history of the Libertines without any of the heart, hysteria or mythology. Palma Violets have tried hard to sound like they wrote, rehearsed and recorded this album in a haze of alcohol and cigarette smoke, but it only comes off reeking of a contrived, laddish aesthetic. 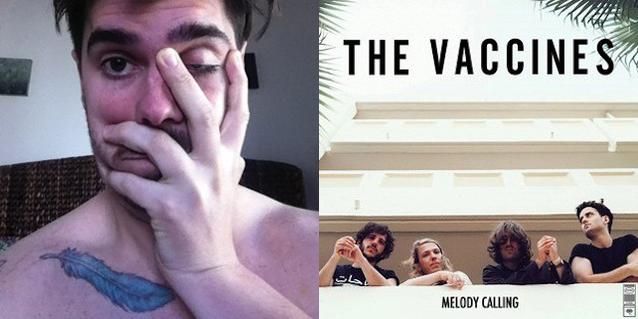