Alia Shawkat, actress (imdb), writer (of this piece) and artist, tells us about A Girl Walks Home Alone at Night by Ana Lily Amirpour. You can see her artwork at mutantalia.com.

A friend of mine told me I should see this movie called A Girl Walks Home Alone at Night, as he thought I’d love it. He is a filmmaker I respect who had never suggested a movie to me before, so I requested a screener and watched it.

A Girl Walks Home Alone at Night opens like an old black-and-white Western, but set to Arabic music. “Alright,” I thought, “I’m in.” I think I even sat up straighter to get a better view. It has everything I want in a movie: a creeping pace that keeps you entangled, a handsome leading man with pathos, and a badass girl who’s just doing what she has to in order to survive. The film was made in a rural part of California, and the audience gets lost in this strange place, Bad City, where vampires skateboard and thugs are crass and comedic. And it looks amazing; it’s stylized like a graphic novel and every light cuts a sharper line than the last.

I immediately realized I needed to meet the person who made this piece of work that I wanted to live inside of, Ana Lily Amirpour. My agent set it up, and boom, Hollywood blind date. She requested meeting at the Kibitz Room next to Canter’s. I entered as a lone comedian tried his stand-up in the corner; a tomboy with a baseball cap and shaggy hair was sitting at the end of the bar rooting him on. That’s Lily. A big smile and no pleasantries.

A Girl Walks Home Alone at Night is the kinda film I want to see and be a part of. Lily’s energy, transferred through the film, is an unapologetic source of sharpness and honest moments. David Lynch and Bruce Lee are her heroes. She told me she writes in Vegas because the way the lighting hits the carpet inspires her. Her perspective on making films was so energizing. She has so many stories in her head she wants to tell that she has to jot them down; there’s a teenage boy’s energy in the fervor she has.

Amirpour does not conform to any of our standard expectations about a female filmmaker “on the rise.” The film industry, sadly, seems to categorize women directors by the types of stories they tell, but A Girl Walks Home Alone at Night is sexy and cool and would be highly enjoyable for anyone, in my opinion. Cinematographer Lyle Vincent brings it fully to life without a moment of fat. Each beat is hit perfectly and even the smoke from the characters’ cigarettes, which stands out in black and white, creates a perfect transition from one scene to another.

In Bad City, a deep loneliness is suffered by all and it allows these well-drawn characters to become true heroes. The performances are so spot-on, from Marshall Manesh as Hossein, the junkie father who can’t let go of his wife’s passing, to Dominic Rains as Saeed, the cartoonish thug who is genuinely terrifying and charismatic. Amirpour brings every storyline to life to such an extent that no matter where the movie goes, the audience is game to follow her.

As an aspiring director myself, I’m inspired by the simplicity and clarity in Lily’s storytelling to clear the extra nonsense in my own narrative and creatively state what I’m trying to say in a beautifully fabricated world. Also, as an actress, I am drawn to leading female characters and get excited to see how one can stand out amongst so many flat, two-dimensional girls. The Girl is introduced to us alone in her room, an intimate moment of a person listening to a record and dancing. Her moves are mesmerizing. Lily said she showed Sheila videos of cobras and other snakes so she could mimic their moves.

The romance, the honest rebel rage, and the sad story of lost people stuck in their ways makes you truly engage with this strong, unique story. A Girl Walks Home Alone at Night makes me want to cut the bullshit of soft storytelling and grab an audience by the throat, while hypnotically dancing my way through the action. I love this movie, and now you know. Go to Bad City and see for yourself.

Alia Shawkat, actress (imdb), writer (of this piece) and artist, tells us about A Girl Walks Home Alone at Night by Ana Lily Amirpour. You can see her artwork at mutantalia.com. 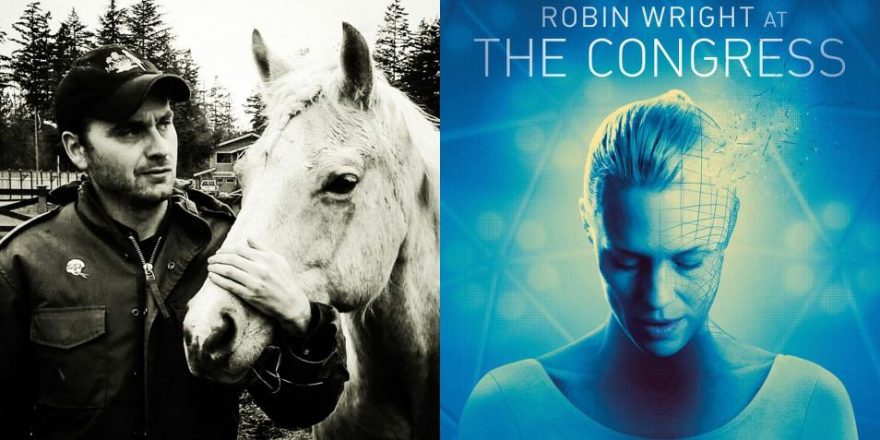