In the final scene of Out of the Past, Ann (Virginia Huston) goes to see “The Kid” (Dickie Moore) at the service station in Bridgeport, California, where he worked and was the closest confidant of Jeff Bailey (Robert Mitchum). Ann was in love with Jeff right up to the end, even though he was wanted for murder, and worse, may have been romantically entwined with Kathie (Jane Greer), the woman from his past who ultimately killed him. Still, Ann had faith in Jeff and believed he would make things right. She asks The Kid if Jeff was indeed going away with Kathie. The Kid, a deaf mute who reads lips, considers this for a moment. He knows that Jeff was through with Kathie, but he also knows what Ann needs to hear. Conflict is evident in his eyes for a moment, but then he nods “yes,” that Jeff was going off with the other woman. Ann thanks him, barely holding back tears, and drives off with Jim (Richard Webb), her dependable childhood friend and suitor. Will The Kid’s lie allow her to let go of Jeff and move on with her life in a way that Jeff wasn’t able to? This ending has a glimmer of hope, if you allow it to — but I never bought it.

I first watched Out of the Past (1947) — at home, on a VHS tape — about 20 years ago, and I’ve been haunted by it ever since. Bleak endings are not unusual for film noir, but the ambiguity of this one felt like there was something more there, beneath the surface; over the years I realized that’s why it had its hooks in me. It’s common for the genre to contain puzzles, hidden meanings, secret political agendas and parallel psychological investigations. I am not intimate with other works by Out of the Past‘s French director, Jacques Tourneur, or its screenwriter, Daniel Mainwaring (writing as Geoffrey Homes, whose novel, Build My Gallows High, was the basis for this movie), so I’m taking the film at face value. In the last shot, The Kid waves up to the filling station sign, “Jeff Bailey,” and then walks off and becomes a silhouette in a particularly grim landscape that recalls the oppressive black and white home of Dorothy Gale in The Wizard of Oz (a place that, in spite of Dorothy’s mantra, “There’s no place like home,” you know she won’t be happy again until she leaves). This closing shot is an odd visual choice considering the town is surrounded by majestic snow-capped mountains which could have signified a hopeful life for Ann. But what we see is a trash heap, outbuildings, barren trees and a grim, old church or schoolhouse. Just before that final image, we see Ann drive off with Jim, the camera panning, then stopping to bring into frame a round business sign that says: “Ann’s Grill.”

I’ve always wondered if that meant something, and if so, what did it mean? It’s very brief and likely to go unnoticed, yet I noticed it on blurry a VHS tape. Of course, when the movie was released I’d have to believe it was very evident, though fleeting, on the movie screen. When I was younger I used to have the habit of sitting through first-run movies twice, particularly ones that intrigued me, and I’m sure multiple viewings at the cinema were not that uncommon in 1947. I have yet to find anything discussed about this oddity, though much is written about this film as one of the greatest examples of the genre; it’s considered by many to be the classic film noir.

Though a minor character, Ann is oddly the center of the story. In her first scene with Jeff, at the lake, her love for him is evident, and she also sees him as a way to escape her small town. “You’ve been to a lot of places, haven’t you?” she asks. “One too many,” he replies. He’s found the place he wants to stay, right there. But the next day, when Ann accompanies Jeff on the drive up to Lake Tahoe to meet with Whit Sterling (Kirk Douglas) and to confront his past, he tells her that his real name is Jeff Markham and that he’s been hiding out in Bridgeport. We see the story in flashback, with Jeff narrating, but through Ann’s eyes. And it’s ultimately the account of his love for another woman.

Out of the Past then becomes almost another movie, with twists and turns, double-crosses and a convoluted story to rival The Big Sleep, with the poetry of its shadowy scenes and minor characters. It culminates in one of the more shocking off-screen murders I’ve seen in a movie. But then it comes down to love again — more of a love rectangle than triangle. Geometric references are constantly echoing in the dialogue: “You’ll never be happy until you square yourself,” “Like two and two makes four,” “square an old account,” endless talk of “frames,” and a location called the Mason Building — if you want to go there. Is Jeff in love with Kathie, or is it just about the sex? (Kathie is presented as the embodiment of the femme fatale, a post-war concept based on the fear of women, something which is as acute now, in 2017, as it ever was.) Kathie may or may not be in love with Jeff, but she’s definitely using him. Ann is in love with Jeff, but is Jeff in love with her, or just enamored with her trust and devotion, and the hope for stability? Jim is in love with Ann; the question is, after Jeff and Kathie are out of the picture, will she fall in love with him? I don’t think so. 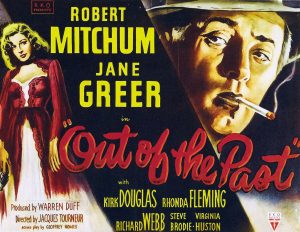 Throughout the movie, we are asked to pay attention to signs; indeed, The Kid, who frames the movie, communicates by “signing.” The opening credits, shown over very un-noir-like images of majestic mountain peaks, pause to show a road sign that accurately sets up the geography: one mile to Bridgeport, as well as distances to Lake Tahoe and Reno in one direction, and Bishop and Los Angeles (“City of Angels”) in the other. Another sign points back to “Twin Lakes.” It’s a real place, but what’s significant is the extent that every character has a double in this movie, sometimes more than one, and sometimes the doubles have doubles. (A dream double feature for me would be this movie and David Lynch’s Mulholland Drive.) The film begins with a really striking shot, the camera moving, seeing from the point of view of gangster Joe Stefanos (Paul Valentine) as he drives into town — establishing the feeling of the place, its size, geography, and a sense of reality. We pass a sign for “Cain’s Garage” —could this be a reference to James M. Cain (uncredited screenwriter), or maybe Cain and Abel? Or maybe it just happened to be there. And then as Joe pulls into Jeff Bailey’s garage — seen only fleetingly, but directly across the street — we see the sign for “Ann’s Grill” — at the same moment Jacques Tourneur’s credit comes on screen.

Joe asks The Kid about Jeff, then crosses the street to the cafe, and the sign now says Marny’s Cafe. Continuity error or intention? You decide. Joe walks in, but before he can order, Jim drives up, enters, and he and Marny flirt. “Did you dye your hair?” he asks, and she asks why. “I always keep thinking of you as a blonde.” (Marny has dark hair; Ann, who we haven’t seen yet, is blonde.) Marny (Mary Field) is a middle-aged, classic diner waitress who talks constantly, and she goes on to talk about Jeff and Ann, and how she suspects a romance: “I just see what I see.” “You sure you don’t see what you hear?” Jim asks. “I’m just sayin’ what I see,” she goes on. The dialogue is almost surreal. Finally, she says, “First she’s got you, now she’s got Bailey. And the only thing I seem to get is older.” Jim leaves, visibly upset, and then Joe, who has been listening, questions Marny. “Seems like everything people ought to know, they just don’t want to hear,” she says to Joe. “I guess that’s the big trouble with the world.” “Either that or you’re on the wrong side of the counter,” he says.

All of this is a device to pretty much set up the story and get a lot of information to the audience (as well as Joe) very quickly. But is it also laying out a subtext? Joe tells Marny, “I often wondered what happened to him, and one day I’m breezing through here and there’s his name up on the sign.” Of course, we find out later that he’s lying; Jeff’s real name is Jeff Markham, and Joe wasn’t tipped off by seeing the sign at all; he had seen Jeff. “It’s a small world,” says Marny, to which Joe says, “Yeah. Or a big sign.” We then cut to Jeff and Ann, out at the lake, engaged in romantic dialogue, in the middle of which Ann says, “They say the day you die, your name is written on a cloud.”

There are so many reasons this is my favorite film noir: complex characters, terrific acting, witty dialogue, an intriguing structure and stunning visuals. But most of all, it’s the layers of meaning behind everything we see and hear; everything means something else, except, maybe when it doesn’t. I’m not sure it’s possible to ever get to the bottom of it all. And then there’s this ending, the melding of Marny’s Cafe and Ann’s Grill. For me, it’s the total subversion of the classic Hollywood happy ending. I see Ann there, in the future, the middle-aged woman working at the diner counter, flirting with customers, vicariously living the lives she observes, seeing everything that goes on in the small town through the window with her name painted on it.