One of the most common complaints people have about sequels is that they’re retreads of the originals; cash grabs with no reason for existing other than to replicate a storyline and formula that already exists. Yet on those rare occasions when a filmmaker takes advantage of the presumed built-in audience that a sequel provides to do something different, deeper, or more daring (Peter Bogdanovich with Texasville, George Lucas’s Star Wars prequels, Joe Dante with Gremlins 2 – though that one seems to be meeting with some positive reappraisal in the age of Trump), the knives really come out. As much as audiences bitch and moan about the lack of originality in sequels, nothing makes them feel more betrayed than a sequel that goes against the grain of the original; it’s as though some kind of contract has been broken, whether the filmmakers knew it even existed or not. To make a sequel that really connects both critically and commercially is tougher than it looks – you have to get right in that sweet spot James Cameron found with Aliens and Terminator 2: Judgment Day, or that George Miller achieved in Fury Road: make something familiar, but not too familiar – new, but not too new.

John Boorman’s Exorcist II: The Heretic, which celebrates its 40th anniversary this year, was one of those movies that got the balance wrong, at least in terms of critical appreciation and public perception. While profitable, the film was a commercial disappointment compared to the original, and among critics, Pauline Kael was in the vast minority in finding Boorman’s film praiseworthy. Yet time has proven the naysayers wrong and Kael right – viewed today, divorced from whatever expectations Boorman failed to fulfill in 1977, Exorcist II completely supports Kael’s assertion that it contains “more visual magic than a dozen movies.” Photographed by William Fraker, it’s one of the most unabashedly gorgeous movies ever made; a masterpiece of art direction and cinematography that deserves to be ranked alongside The Conformist, Blade Runner and Rumble Fish as a master class in storytelling through visual design. Yet its initial reputation as a disaster has been hard to shake – a cursory Google search of the title reveals numerous essays from recent years with titles like “So Bad It’s Good” and “My Year of Flops Case File #32.”

Exorcist II’s reputation as a flop has followed it around since its release, which must really stick in Boorman’s craw given that the movie actually did make money – in fact, it made money before it was even released thanks to Warner’s various pre-sales, which is possibly why Boorman had carte blanche to utilize studio resources on what’s essentially the most expensive experimental film of all time. (On the other hand, Friedkin’s Sorcerer, which was released the same year and has enjoyed a critical reappraisal denied Boorman’s film, was a genuine flop that failed to make back even half of its budget.) The fact that Exorcist II was a sequel to one of the most popular movies in history both enabled Boorman to follow his muse without limitations and doomed him in terms of his intentions being properly understood. He has said that it was a mistake on his part to assume the audience would be willing to follow his lead, since they clearly weren’t interested in a poetic Exorcist that played more like metaphysical science fiction than horror. But how is it a mistake, if the movie replenished what it took out of Warner Bros.’ coffers and gave the world something far rarer and more valuable than just another sequel?

To be fair, by conventional standards of horror filmmaking – even by conventional standards of narrative filmmaking in general – Exorcist II: The Heretic doesn’t exactly work, at least it doesn’t work if you’re the kind of person who thinks movies are only about acting and writing. And I think there are a lot of those people out there – they’re the kind of people who blather on about how TV has become vastly superior to cinema. Viewers who think the script for Exorcist II is awful because it doesn’t follow their preconceived notions about how stories are supposed to be told (picked up from where – Robert McKee?) are misunderstanding Boorman’s approach on a fundamental level. The basic story’s primary connection to the first film is Regan (Linda Blair), the little girl who was possessed by the devil in The Exorcist and who is now on the verge of young womanhood. In Exorcist II, she regularly sees psychiatrist Dr. Tuskin (Louise Fletcher), who uses a high-tech tool known as a synchronizer to link different subjects’ brainwaves. Without getting into a lengthy description of the convoluted plot, I’ll just say that it involves Regan telepathically connecting with a variety of people including a priest (Richard Burton) who has visions of an earlier exorcism in Africa and becomes determined to both vanquish whatever evil remains in Regan and to follow through on the implications of theories of psychic connection posited by Father Merrin (Max von Sydow), the exorcist from the first film.

There’s a lot more to Exorcist II than that – too much more, for those who want their horror straightforward and unencumbered by digressions and philosophical inquiry. Boorman, however, uses the milieu as a springboard for examinations of a dizzying array of profound questions – questions having to do with identity, with the relationship between history and ethnography and contemporary existence, with the opposition between science and religion and the potential for their integration. Most of these notions are not overtly stated in the dialogue or even depicted via the action; they’re implied via a sophisticated network of visual and aural motifs, images connected to each other like the memories and experiences linked together in the story by the synchronizer. Themes of isolation and connection are conveyed by the production design in sets such as the clinic where Tuskin works, which consists of mirrors and glass partitions that separate, reflect and distort the characters; the setting is then subtly paralleled via compositional elements and aural repetitions in Regan’s New York apartment and the African setting Burton visits both in reality and in visions. 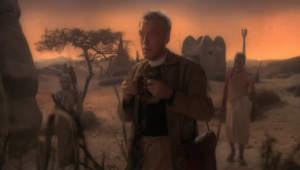 There’s a pervasive sense of unease and dread underlining the jaggedly matched subplots, but it too comes less from the script than from Boorman’s impressionistic visual approach. His use of color, for example, is remarkably consistent, eliminating blues and greens in an effort to remove any sense of nature from the image. Indeed, all of Exorcist II contains a distinctly unnatural quality thanks to Boorman’s decision to shoot virtually the entire movie on soundstages. It’s the polar opposite of Friedkin’s ultrarealistic sensibility, and possibly one reason audiences and critics had a hard time accepting it – though complaining about the lack of realism in Exorcist II: The Heretic is like complaining about the lack of musical numbers in Henry: Portrait of a Serial Killer.

However, I don’t entirely disagree with Exorcist II detractors who find the movie to be rather ridiculous and nutty. Elements of it are ridiculous and nutty, and it’s precisely the coexistence of Boorman’s weirder conceptions – James Earl Jones in a locust costume, Burton constantly beset by locusts, a Linda Blair tap-dancing musical number – with his precisely engineered formal experiments and lofty metaphysical musings that make Exorcist II special. It has the mind and eye of a visionary art film with dashes of the goofy pleasures of a creature feature or an uncategorizable, batshit-crazy supernatural horror film like Giulio Paradisi’s The Visitor. I’m not sure why people assume the disparate elements represent a failure of conception or execution on Boorman’s part; clearly these are all different sides of the director’s personality and represent his diverse array of preoccupations and interests – this is the guy who made Deliverance and Zardoz, after all.

Throughout his career, whenever Boorman has been underrated or misunderstood, I think it’s due to the breadth of his worldview, which sees human existence through a mind shaped by science, literature, theology, painting, photography, politics and mythology. Thus when he makes a movie like The Tailor of Panama, which is simultaneously a lighthearted comedy and a devastatingly serious and tragic morality tale, or Beyond Rangoon, which shifts from archetypal lyricism to brutal sociologically oriented reality, it’s a lot for some viewers – even smart ones – to wrap their heads around. His best films combine styles, ideas and tones that few other directors would think to combine – who else has, or ever would, make films as completely original as Point Blank and Excalibur? Exorcist II: The Heretic remains Boorman’s most underappreciated film precisely because it belongs to a tradition – that of the sequel – where such originality is not only unexpected, but frowned upon. Given that nowadays you’ve got to sustain a franchise for as many films as the market will bear, rolls of the dice such as Boorman’s are unlikely to appear in the Hollywood studio system again. Forty years on, Exorcist II: The Heretic feels more revolutionary and audacious than ever. 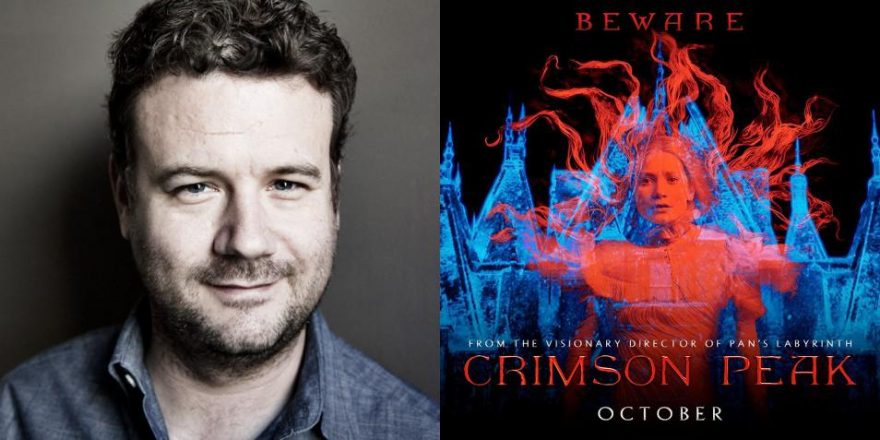